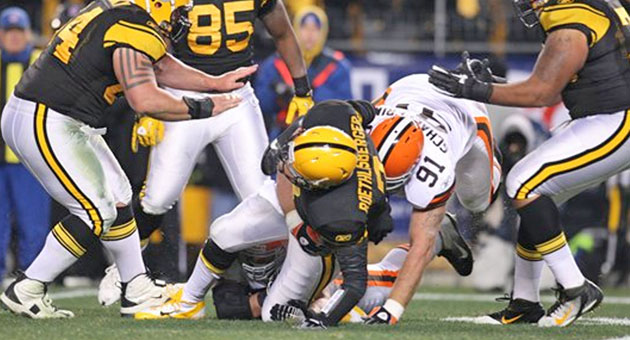 Cleveland Browns’ defensive lineman Brian Schaefering (91) brings down Pittsburgh Steelers’ quarterback Ben Roethlisberger during Thursday night’s game. Roethlisberger left the game in the first half with a leg injury but returned in the second half to throw his second touchdown pass in a 14-3 win over the Browns. (The Ironton Tribune / Courtesy of the Cleveland Browns).

He may be running out of chances.

The second-year Cleveland quarterback passed for 209 yards but also threw a pair of interceptions as the Browns lost to the Pittsburgh Steelers 14-3 on Thursday night.

McCoy dropped to 0-8 against division rivals as a starter, and this one might have been the most painful. The Browns (4-9) briefly knocked Pittsburgh quarterback Ben Roethlisberger out of the game and had several chances to knock off the Steelers (10-3) for just the second time in the last 16 meetings but couldn’t quite get it done.

“We felt good, we just couldn’t score points,” McCoy said. “That’s the problem. We’ve got to figure it out.”

And do it quickly.

McCoy completed 18 of 35 passes but also took a beating, including a shot from Pittsburgh linebacker James Harrison in the fourth quarter that left him momentarily dazed.

The Browns were driving in Pittsburgh territory with less than 6 minutes left when McCoy tucked the ball under his arm briefly as if to run. He pulled up as Harrison approached and flipped a short pass to Montario Hardesty just before Harrison smashed into him. It was a helmet-to-helmet hit, and Harrison was flagged for roughing the passer.

McCoy laid on the field for several moments before making his way off. He refused to say whether he felt Harrison’s hit was a cheap shot, but acknowledged that “it got me for a minute.”

Harrison, who has faced stiff fines in the past for hits against defenseless players, believes he didn’t do anything wrong.

“From what I understand, once the quarterback leaves the pocket, he’s considered a runner,” Harrison said. “All the defenseless(ness) and liberties that a quarterback has in the pocket are gone and you can tackle him just as he’s a running back. The hit wasn’t late, so I really don’t understand why it was called.”

Seneca Wallace filled in, leading the Browns to the Pittsburgh 5 before McCoy returned.

Though he insisted he was “good enough to go back in the game,” McCoy didn’t exactly play like it. He was flagged for intentional grounding on his first play back to push the ball back to the Pittsburgh 16, then tried to hit Mohamed Massaquoi in the end zone on the next snap, but Pittsburgh’s William Gay easily stepped in front of it for an interception.

“I just didn’t get enough on it, underthrew it and their guy made a nice play and that was basically the game,” McCoy said.

And the season for the Browns, who are just 1-15 in their last 16 meetings with the Steelers.

“You can look at the raw yardage and say, ‘Well, I don’t know what kind of performance it was,”’ Cleveland coach Pat Shurmur said. “But we kept them out of the end zone until that last big pass. There’s some things we can build on.”

The Browns are already thinking about next year. Not the Steelers, though. Their season appeared to be in jeopardy after Roethlisberger took a vicious hit in the second quarter.

Roethlisberger was scrambling to avoid pressure when his left leg got caught underneath Cleveland’s Scott Paxson.

“It was one of the most painful things I ever felt,” said Roethlisberger, who passed for 280 yards and two touchdowns. “It felt like the middle of my leg was just, cracked. … It felt like my foot was outside of my leg.”

He went to the locker room for X-rays while veteran Charlie Batch tried to fill in. The X-rays showed no break and Roethlisberger returned.

Roethlisberger received a rousing ovation when he walked back onto the field to start the second half, though it was obvious he was in serious pain. He hobbled to the line of scrimmage, he tip-toed while handing the ball off and he grimaced while stepping up to throw.

Yet he somehow completed 8 of 12 passes for 178 yards after the break, including a 79-yard touchdown to Antonio Brown, who caught the ball near midfield and then beat Cleveland’s Mike Adams to the end zone.

“I’m proud of him and glad he scored because I wouldn’t have been able to make it down there if we had to run another play,” Roethlisberger said, laughing.

Roethlisberger will have an MRI exam Friday to determine the extent of the damage. The Steelers have 10 days off before a game in San Francisco.

Brown finished with five receptions for 151 yards and a score as the Steelers (10-3) won for the eighth time in their last nine games to move a half-game in front of Baltimore for the AFC North lead.