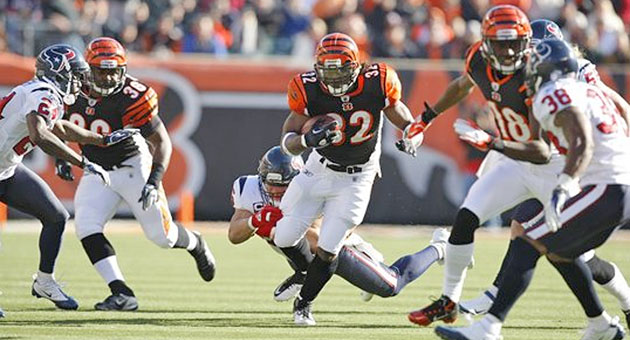 Cincinnati Bengals’ running back Cedric Benson (32) runs through a huge hole in the Houston Texans defense during Sunday’s game. The Texans scored with two seconds left to beat the Bengals 20-19. (The Ironton Tribune / Courtesy Of The Cincinnati Bengals)

CINCINNATI (AP) — The Bengals’ playoff chances got blown away by a rookie quarterback.

The Houston Texans left the field with arms raised in celebration after rookie T.J. Yates threw a 6-yard touchdown pass with 2 seconds left for a 20-19 victory Sunday that likely scuttled Cincinnati’s chances of postseason play.

At 7-6, the Bengals fell behind in the chase for the final AFC wild card berth. They’ve lost four of their last five, turning what started as a promising season into something that’s starting to look like another disappointment. The Bengals have reached the playoffs only twice in the last 20 years.

“It’s not even about the playoffs anymore,” safety Chris Crocker said. “We can’t think about the postseason until we start winning games. It’s a remote idea right now. Just win.”

With their seventh straight win, the Texans (10-3) moved to the threshold of the playoffs. They hugged on the field then headed to the locker room, where they huddled around a television set and watched the final minutes of Tennessee’s game play out.

They needed a Titans loss to clinch the AFC South.

When time ran out on the Titans, preserving New Orleans’ 22-17 victory, the Texans screamed, hugged, and donned black championship caps and white T-shirts. Since their inaugural season in 2002, the Texans have been little more than a tease. They’d come close to reaching the playoffs, only to fade and fumble in the big games.

An unlikely rookie took them the last step.

Yates, a fifth-round draft pick, got his chance when Matt Schaub and Matt Leinart suffered season-ending injuries in consecutive weeks. Making only his second start, Yates led the Texans on their biggest comeback of the season.

With everything on the line for both teams, the Bengals couldn’t stop him.

“A rookie quarterback beat us today,” Crocker said. “He did it with both his arm and his feet. I don’t even know what to say. Wow.”

Yates scrambled 17 yards on third-and-15 to keep the drive going. A pass interference penalty on Adam “Pacman” Jones put the ball at the 6-yard line with 12 seconds left. After an incompletion, Kevin Walter lined up wide right, cut to the middle of the field and was uncovered at the goal line.

“If you consider the percentages, when a team has to go 80 yards to score, the defense is favored,” linebacker Manny Lawson said.

Only 41,202 fans — the second-smallest crowd in Paul Brown Stadium history — showed up to watch the Bengals turn themselves into a long shot for the playoffs. They’d lost three of their last four, including a 35-7 drubbing in Pittsburgh last week that essentially eliminated them from the AFC North race.

“As far as the team goes, they are very disappointed and I’m going to have to pump some air in them,” coach Marvin Lewis said. “Before this game, we controlled our own destiny, and now I can’t tell you what is going to happen.”

The Texans have kept winning while losing quarterbacks. They took the final step into the playoffs without leading receiver Andre Johnson, who was inactive Sunday because of a strained left hamstring.

Yates and a solid defense pulled them through. Yates went 26 of 44 for 300 yards with two touchdowns, one interception and five sacks.

Houston’s defense was the stingiest in the AFC, and came through after the Texans fell behind 16-3 at halftime. Andy Dalton was sacked and fumbled, setting up Yates’ 6-yard touchdown pass that got the Texans some momentum early in the third quarter.

“It did not look like we had any chance of getting out of here with a win,” Texans coach Gary Kubiak said. “But we have a young quarterback who believes in what he’s doing.”

Notes: The Bengals managed 81 yards in the second half. Cedric Benson carried eight times and lost a yard overall in the half. … Houston had one sack, leaving it one shy of the club record of 37 in 2005. … Cincinnati’s Mike Nugent kicked field goals of 22, 47, 49 and 28 yards. … RG Bobbie Williams hurt his right ankle in the second quarter and didn’t return. … The crowd was smaller than one of the University of Cincinnati’s two games at Paul Brown Stadium this season. The Bearcats drew 48,152 fans for a game against West Virginia on Nov. 12. Their game against Louisville on Oct. 15 drew 40,971.

By JIM WALKER Tribune Sports Editor   RIO GRANDE — If the Chesapeake Panthers are just starting to get better,... read more