Cause of storage unit fire unknown 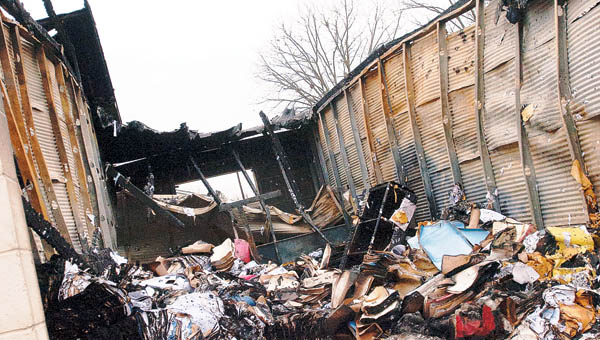 Buckled metal walls are all that are left of units at Convenient Storage Mini Units following a fire Monday.

When Cathy Best saw an orange glow in the sky early Monday evening, she knew it wasn’t the beginning of a sunset.

As she saw flames shoot out of the storage building a block from her home, she watched some of her worldly goods go up in flame. The next afternoon she and her husband looked over the remnants of their unit at Convenient Storage Mini-Units by the Sixth Street Bridge.

Yet she remained philosophical and upbeat.

As she pointed to the mass of twisted metal sheeting that lay near the edge of the riverside lot, “These are people who lost their hopes and dreams,” she said. “Their hopes to find a new place to live.”

At a few minutes after 6 p.m. Monday county 911 dispatchers got the call about a fire at the storage units. Best and her husband watched as volunteers from the Chesapeake fire department fought the blaze with pumper trucks.

“It was pretty big,” she said. “You could see a yellow glow about a half-mile away. It was a big yellow cloud in the sky.”

Best said firefighters were at the scene until 10 p.m. and returned the next morning when the scene rekindled.

The couple lost two motorcycles — one an anniversary present to Best from her husband; books, luggage, clothing and a baby bed and mattress.

As of Tuesday afternoon the state fire marshal’s office had not determined the cause of the fire or were releasing its origin.

While there was no electricity at the units, there were lights surrounding the area.

“We want to make sure that we have all the facts about the utilities in the area of origin, who had access at or around the time of the fire and any other information that could be pertinent to the investigators,” Cartmill said. “At this time accidental and intentional causes are both still on the table.”

There were 36 units with contents affected — half of them by fire and the rest had smoke damage. There were no injuries.