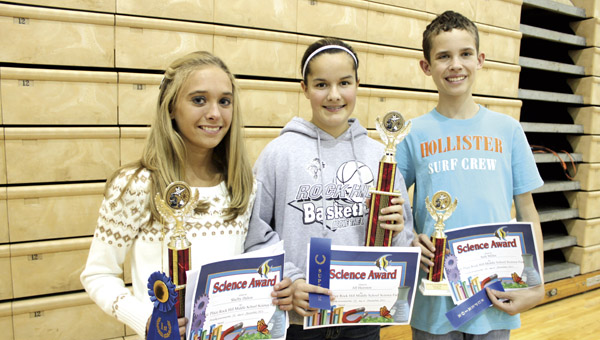 PEDRO — From water quality to how acidity affects the cleaning power of household chemicals, more than 90 students at Rock Hill Middle School generated and answered science questions, at this year’s Science Fair on Wednesday.

Seventh grade science teacher Kathy Gore said middle students in grades Sixth to Eighth are not required to participate in science fair but do so to earn bonus points and to compete at the next level. Many of the students are required to do portions of a project in class but spend their own time completing the displays and other items for science fair.

Gore said she has been pleasantly surprised by how students chose to display their findings. “It is pretty interesting,” she said.

Science fair projects are a great way, she said, for students to put into action what they have been taught about scientific inquiry in an area that interests them.

“In all of our grades, what we teach is scientific inquiry that is the basis of our science knowledge, is being able to look at the world around you and say, ‘I have a question about this ‘and trying to find that answer. ‘What do I think will happen’ and ‘this is what I am going to go through,” she explained. “These are the basic though processes we go through for a lot of things in our life, we just don’t consider them results, conclusion, this is my hypothesis –— but it is that thought process that we are trying to be encourage in science. It is trying to inquisitive about your whole world and come up with what is going on. “

Shelby Dalton, an eighth grader took home the first place trophy, after netting a perfect score of 40 points from all three judges. Her project analyzed the water quality in the Ohio and Mississippi rivers

Second place winner Jill Hariston studied planarians, a kind of non-parasitic flatworms. She bisected the worms to find out whether or not they regenerated faster with magnets. Hariston, a seventh grader who participated in last year’s science fair, said her second place finish surprised her. “I just love science,” she said.

Seth Miller, an eighth grader who studied whether lateral spreading could be prevented in earthquakes through the use of retaining walls, took third place on Wednesday.

“I like engineering and the environmental aspects of it,” he said.

Community members from a range of professions served as science fair judges.

School board member Paul Knipp, a Rock Hill graduate, was one of the judges. He said projects were “very good. Very well put together, with some good ideas.”

Knipp said it was “very hard” to judge projects. “It’s great that the teachers do it and it’s a good way for students to express what they learn in the classroom.”

U.S. Forest Service employee Cindy Henderson, who takes care of engineering and contracting work, was one of the experienced judges. “It’s a lot of fun for the judges,” she said, “it’s really great to see what they come up with. It’s kind of surprising, some of the simplest studies will be the things that they put the most thought into. They have really checked out their variables and set up good baselines and it is really impressive how the students think through the things they come up with.”

Others answer indictments for violent crimes, drugs, burglary   A knife-wielding man accused of snatching a woman’s purse in the... read more