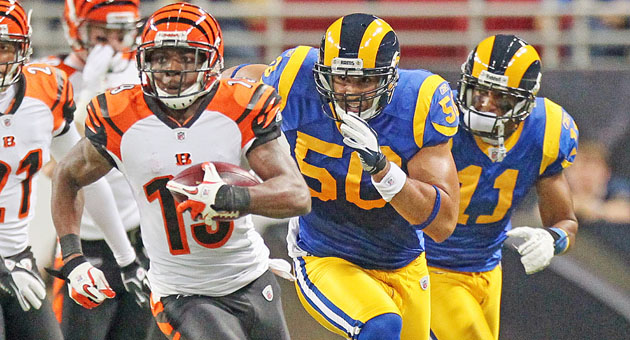 ST. LOUIS — All but counted out near halftime, A.J. Green re-emerged and reached a nice rookie milestone. Helped the Cincinnati Bengals get off the mat, too.

The rookie wide receiver had six catches for 115 yards to top 1,000 yards and the Bengals held an offense led by a quarterback still learning his own team’s personnel to 2 for 13 on third down in a 20-13 victory over the St. Louis Rams on Sunday, allowing them to keep pace in the AFC playoff race.

Green had been questionable to return with a sprained right shoulder from getting tripped up on a pass interference play. He had only two catches after the break, but both were for first downs.

Brandon Tate’s 56-yard punt return set up Bernard Scott’s go-ahead touchdown run late in the third quarter and Cedric Benson added a short scoring run in the fourth for the Bengals (8-6), who won for only the second time in six games.

Cincinnati was among three teams that entered a game behind the New York Jets, who were playing at Philadelphia, for the final AFC wild-card berth. The Bengals closed it out when Tate fielded Josh Brown’s onside kick with 1:08 left and are at home the rest of the way against the Cardinals and Ravens.

“If we finish strong, we’ll give ourselves a chance,” cornerback Nate Clements said. “Guys are going to be focused on the opponent at hand.”

Green caught a 55-yarder from Andy Dalton to set up a field goal for the game’s first score. He has 1,006 yards receiving, leaving him 3 shy of Cris Collinsworth’s franchise rookie record in 1981.

Kellen Clemens was 25 for 36 for 229 and a late touchdown pass to Danario Alexander for the Rams (2-12), who have lost five in a row. Clemens made his first start in two years after joining the Rams last week. Starter Sam Bradford (ankle) missed his fourth start after not practicing all week and backup A.J. Feeley (broken thumb) was out for the second straight week.

“Third down was obviously an issue,” Clemens said. “Very unacceptable. So, I’ll start there and I’ll stop.”

Coach Steve Spagnuolo is 10-36 winding down his third season. He had only positives for Clemens, who has had only seven practices.

“I know all the offensive guys,” Clemens said. “I literally have gone home at night and just looked at a roster because I think that’s important from a leadership standpoint.”

The Rams totaled 6 yards on third down, and didn’t convert until late in the fourth quarter. Plus, they were whistled for 109 yards on 10 penalties, including a handful of critical calls in the second half. The teams combined for 21 penalties for 210 yards.

Tackle Harvey Dahl was whistled for consecutive penalties in the fourth quarter, one for holding and another for unsportsmanlike conduct for complaining after barging in during referee Jerome Boger’s call on a live microphone.

“I made a bad situation worse,” Dahl said. “Obviously, you’ve got to stay composed there. I didn’t know the microphone was on.”

About a dozen former teammates from the Rams’ 2000 Super Bowl championship team attended a halftime ceremony in which Hall of Famer Marshall Faulk was added to the ring of fame in the Edward Jones Dome. Several others, including Kurt Warner, Dick Vermeil and Isaac Bruce, weighed in with video tributes.

The Rams wore throwback uniforms honoring that era, hoping to recapture the form from their best game of the year, an out-of-nowhere upset of the Saints in Week 7 for their first victory. Though technically a sellout, attendance of 56,431 was about 9,000 shy of capacity and the stadium looked to be little more than half-full.

Cincinnati won despite an off-game from Dalton, who was 15 for 26 for 179 yards with an interception and no touchdowns to end a pair of lengthy streaks. He had gone 107 passes before Josh Gordy’s interception in the third quarter, and had thrown at least one TD pass in 10 consecutive games.

Tate’s punt return, plus a personal foul on James Butler for pushing him while out of bounds, put the Bengals at the 12 and set up Scott’s 1-yard run for a 13-6 lead in the final minute of the third quarter. Two unnecessary roughness calls on linebacker Chris Chamberlain put the Bengals on the doorstep for Benson’s 4-yard scoring run with 9:14 to go.

The teams were a combined 0 for 10 on third down in the first half, with the Rams failing six times, and each totaled just 132 yards.

Green got behind two safeties on what might have been busted coverage on a 55-yard reception to the 2 to set up a field goal for the game’s first score, not long after Eugene Sims was called for roughing the passer call and keeping a drive alive.

Brown missed a 45-yard attempt, but connected from 26 and 43 yards late in the first half to give the Rams a 6-3 lead. The first field goal was set up on rookie Robert Quinn partially blocked punt, which resulted in a 21-yarder to the Bengals 39.

Quinn, the Rams’ first-round pick, has three blocked punts — one shy of the franchise record for a single season. He also has five sacks.

Notes: Rams DE Chris Long got his 13th sack, which matches his Hall of Fame father Howie’s top season total in 1983 … Tate has five punt returns of 20 or more yards.

By JIM WALKER Tribune Sports Editor   The Classic is back and even better. A total of 11 games —... read more