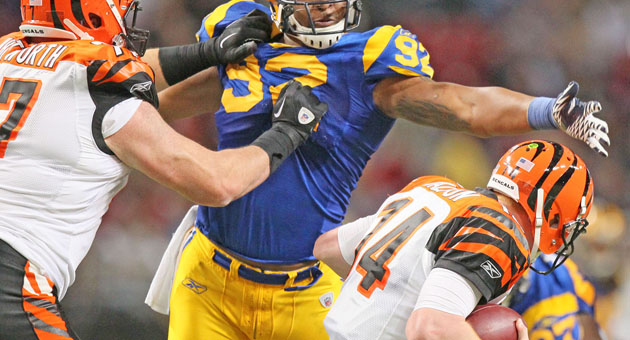 CINCINNATI — The Bengals got some help in narrowing the wild card field. They’ll need a little more to come out on top.

Cincinnati is still in playoff contention heading into its final two games, both at home. It’s a favorable setup, but might not be enough to get them into the playoffs for only the third time in the last 21 years.

A 20-13 win in St. Louis on Sunday left Cincinnati at 8-6, tied with the New York Jets for the final AFC wild-card spot. The Jets currently own the head-to-head tiebreaker based upon better record against common opponents.

The Bengals finish against Arizona (7-7) and Baltimore (10-4). Either the Ravens or the Pittsburgh Steelers will win the AFC North, with the second-place finisher getting a wild card.

The Jets finish against the Giants (7-7) and at Miami (5-9). If both Cincinnati and New York win their last two games, they’ll have the same record against common opponents.

The tiebreaker then would come down to strength of victory — the combined winning percentage of the teams they’ve beaten. The Jets currently have the advantage there as well, although the percentages change each week.

The Bengals have made their surprising playoff run by taking advantage of a weak schedule that could work against them in the tiebreaker. They’re 0-6 against teams that are either currently in first place or have clinched a playoff spot. Five of their eight wins came against teams that have four wins or fewer at the moment.

Cincinnati got some help when Tennessee and Oakland lost on Sunday, narrowing the field of wild card contenders. The Titans and Raiders fell a game back at 7-7, along with San Diego.

One problem: They’re struggling as they head into the two final home games, neither of which is expected to sell out. Cincinnati has lost four of its last six overall, with the wins coming against Cleveland (4-10) and St. Louis (2-12). And both of those came down to the final minute.

The Bengals had 11 penalties for 101 yards on Sunday, keeping the Rams in the game even though St. Louis had to use a new quarterback because of injuries. Kellen Clemens, with the team for only a week, went 25 for 36 for 229 and a late touchdown.

The penalties were especially troubling.

“If we want to make the playoffs, if we want to win these last two, it’s got to be cleaner,” left tackle Andrew Whitworth said.

An offensive line that’s missing two starters struggled to get the running game going against the league’s worst run defense. St. Louis had been giving up an average of nearly 157 yards per game.

With right tackle Andre Smith (ankle) and right guard Bobbie Williams (ankle) out, the Bengals managed only 110 yards on 34 carries. The passing game wasn’t much better, with Dalton completing 15 of 26 for 179 yards with an interception and no touchdowns.

Leading receiver A.J. Green landed hard on his right shoulder in the first half, but returned and played even though the arm was bothering him. He said it was a sprain that shouldn’t keep him out of the next two games.