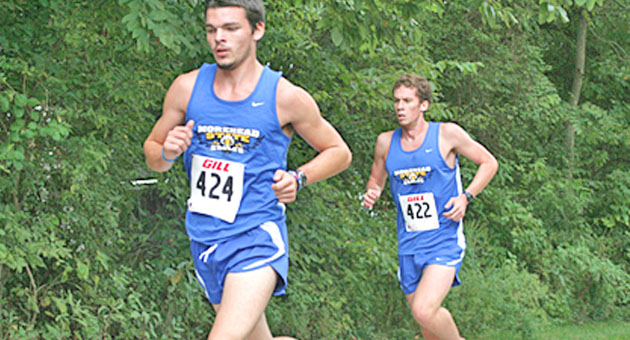 Former Ironton Fighting Tigers’ standouts Pierce Reeves, left, and Gary Monroe were two of the top runners for the Division I Morehead State Golden Eagles this past season despite being just freshmen. (The Ironton Tribune / Courtesy Morehead State University)

MOREHEAD, Ky. — The Morehead State cross country team has found a couple of Eagles who are “golden.”

Golden Eagles’ cross country coach Brent Ericksen found two of his freshmen signees this year to have a big impact despite their youth and inexperience.

The duo led Morehead State in the Ohio Valley Conference championship meet as Reeves was first on the team at 26:52.7 over the 8K course to place 24th and Monroe was just two spots back with a 27:00.67 clocking.

The men finished fourth overall in the standings.

At the strong Greater Louisville Classic, senior Josh Seitz led the team with a 31st place finish in a field of 285 runners, but Reeves ran a 26:15 and Monroe completed the course with a 26:59 time.