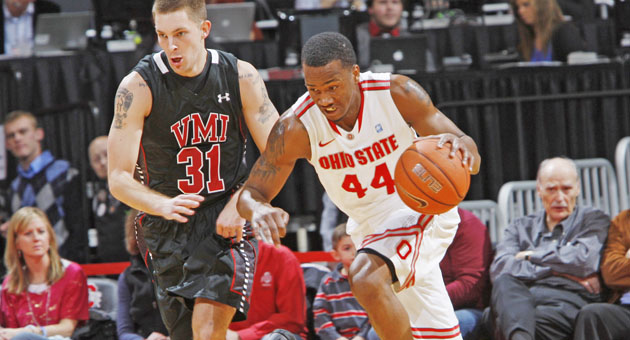 Ohio State’s William Burford (44) drives the ball against Virginia Military’s Michael Sparks during a game earlier this season. Buford is the only senior for the Buckeyes who are looking for a third straight Big Ten title. (The Ironton Tribune / MCT Direct Photos)

COLUMBUS (AP) — Ohio State’s players know it would be quite an accomplishment to win a third straight Big Ten title.

They also know just how hard it is to win one.

The second-ranked Buckeyes (12-1) begin conference play on Wednesday night when they host Northwestern (10-2) in a difficult test at Value City Arena.

“That would be real cool,” said William Buford, the only senior on the Buckeyes’ roster and the only player who was a part of both of those earlier titles.

But sophomore point guard Aaron Craft is well aware of the rigors of a Big Ten season. There’s a lot of work that has to be done before someone wins the title.

“Every game’s going to be a grind. And we’re not even halfway through the season yet — we still have 18 games yet,” he said on Tuesday. “Everyone starts new and whatever happened before doesn’t really matter at all.”

The Buckeyes are encouraged because, for the first time in three weeks, big man Jared Sullinger appears to be close to being healthy. He missed two games with back spasms, and most of another with an injured ankle. After missing a lot of conditioning drills in practice, and playing sparingly in games, he still isn’t in game shape.

“It is going to take him time,” coach Thad Matta said before Tuesday’s workout. “It’s just the getting back to doing the reps. Physically, he’s fine. After Thursday night’s game (a 69-40 win over Miami University) there was some swelling in his foot.”

Matta is more concerned about the wear and tear of keeping him on the floor, staying in the rhythm of the game without getting fatigued or in foul trouble.

“Our guys have come in and practiced for an hour and 40 minutes and guys stay after, they work out,” he said. “He went extended time without that. I think it’s more just him getting his wind, getting his lift, getting back into the flow of things.”

More than worrying about Sullinger, for a change, the Buckeyes are concerned about a Northwestern team that has the Big Ten’s top two scorers in John Shurna (19.4 points a game) and Drew Crawford (18.1).

Northwestern always seems to be at its best against Ohio State. A year ago, the Buckeyes were ranked No. 1 in both meetings and the Wildcats didn’t back down either time.

Even without Shurna on Jan. 29 in Evanston, Northwestern lost 58-57. The teams also met March 11 in a quarterfinal of the Big Ten tournament and the Wildcats took Ohio State to overtime before falling 67-61.

“It’s a combination of style of play and really good players,” Matta said of the difficult times his team has had with Northwestern. “They lost a couple of guys off of last year’s team, but by the same token they’re a veteran basketball team. But we’re a different team and they’re a little different team.”

The Wildcats have lost their past 30 times they’ve played in Columbus.

The Wildcats like to play a precision, pass-screen-and-cut style of offense under Bill Carmody.

“It’s a big concentration game,” Craft said. “That’s one of the best things that Northwestern makes you do. Every possession you have to come down and concentrate for 30 to 35 seconds, otherwise they’re going to score. That’s one of the bigger things we’re trying to focus on right now.”

Ohio State has won 33 in a row at home and is coming off a rigorous non-conference schedule which featured games against Florida, Duke and Kansas.

Matta said he just wants his players to savor the moment.

“The state of college basketball now, everything is blown out of proportion,” Matta said. “I’ve always said this, you get to conference play and now everyone’s going to start talking about March. I know where our mindset is. You hope that the guys understand that these 18 battles we’re getting ready to fight are some of the funnest times of your life.”

By JIM WALKER Tribune Sports Editor   PROCTORVILLE — Control was everything. The Wheelersburg Pirates controlled the game in the... read more