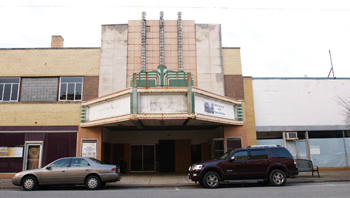 In October, the old Ro-Na theater opened its doors to the public for the first time in years when volunteers hosted a festival that featured cartoons, classic films and locally produced movies.

Now, some city leaders want to see those doors open a little more often in the relatively near future for more entertainment offerings.

Ironton Economic Development Director Bill Dickens said he wants to see someone hired to manage the Ro-Na. The old building sat empty for a number of years and fell into serious disrepair. The shell is now cleaned and has a new roof. Dickens said with the installation of bathrooms and perhaps some heating, he thinks the place could be used for a number of activities.

“I get approached by at least two people a month asking if the old theater is available for some activity,” Dickens told the city parks and recreation committee Wednesday. “The key to reviving the downtown is the Ro-Na.”

“So you think the building can be put into use before completion of the renovations?” committee member Philip Heald asked.

“Yes,” Dickens replied. He and Ironton Port Authority Chairman Paul Woods said they think prospective renters don’t expect to have the building completed on the inside right now.

Dickens said the Ro-Na is key to revitalizing the city’s downtown. He told the committee that in order to draw people downtown, the city has to give them a reason. Renovation of the Ro-Na, along with redevelopment of the former railroad depot as a new restaurant, the completion of the old Berg building and the work at the Depot area downtown, would be a huge step toward putting new shine in Ironton’s image — an image that once drew people from all over the Tri-State.

He suggested local economic development entities partner to establish a one-year program to fund this idea. He said he thinks once the program is off the ground, permanent funding, partly in the form of tax credits, can be used to continue the program. But the two men said seed money is needed first.

“We need to put together a pot of money to keep the Friends of Ironton together and continue to do the work,” Woods told the committee.

Some committee members expressed concern at the idea of funding a plan that includes a community organization that they said may be facing uncertainty.

“I understand the situation but I don’t feel comfortable doing that when they’re in a state of disrepair,” committee member Kevin Waldo explained.

“Would they (the person hired) work for us?” committee member Mike Lutz asked.

“No, they would work for Friends (Of Ironton),” Dickens said.

Cleary suggested the city council have a meeting solely to discuss the Ro-Na.

Believes help comes after surrender to higher power   ROME TOWNSHIP — She is a therapist who understands what it’s... read more