ROME TOWNSHIP — She is a therapist who understands what it’s like to be on the receiving end of therapy.

That’s because Rose Frazer believes that to offer counseling to another, a counselor has to know what it’s like to be a patient.

“In my psychology class, we were told a lot of people become counselors because they need counseling,” Frazer said. “I put myself in counseling, not realizing I was hurt.” 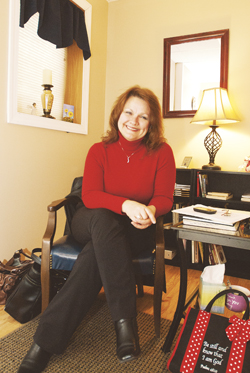 Now Frazer is putting her lessons to work at the Tri-State Christian Care Center, outside of Proctorville, the center she recently opened.

Originally from Columbus, Frazer moved to Ironton at the age of 10, graduating from Rock Hill High School in 1981. After marriage to Rick Frazer, she joined her husband at the campus of Clear Creek Baptist Bible College in Pineville, Ky., where he was studying for the ministry. There she found a vocation she wasn’t expecting to pursue.

“I was going to help my husband,” Frazer said. “There they really encouraged me to get my degree in counseling.”

So in 1993 Frazer earned a degree in Bible and family counseling. But not before the woman who says she was brought up in a non-Christian home went through therapy sessions for herself.

“I stayed in counseling, working on my personal issues,” she said. “You can be hurting and not even know it.”

After her husband earned his degree, Frazer joined him at posts in Texas, before the couple came back home in the late 1990s.

Since then she has offered her brand of Christian counseling to others.

“When God is on the scene, everything is different,” she said. “The AA group has so much to teach the church. They admit they can’t stop drinking. They admit it takes divine intervention. They give into a divine source and they have abstinence.

“A true believer has to have a power beyond himself. I don’t condemn people for not being able to be a Christian. I believe they really can’t. God demands perfection and I can’t do it. When I take Christ in my heart and his ways, he teaches that through him I can.”

About five years ago the couple was part of a group that founded the Living Grace Bible Church in Proctorville where Frazer conducted her counseling center. Recently she moved her offices to the former Liberty Federal Bank building, across from the county fairgrounds.

“God gave me the ability to afford to move my clientele,” she said.

“I have to help them understand who they are in Christ,” she said. “You live what you believe. If you are believing something pretty bad about yourself, you are going to find yourself in a pretty bad situation.”

CHESAPEAKE — Investigators from the state fire marshal were back in Lawrence County Thursday as they continued to look... read more