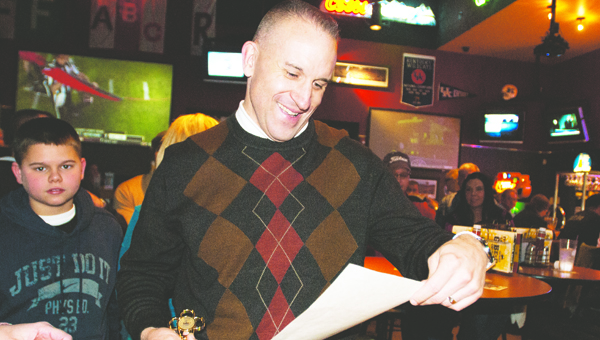 On any given night, the cheers and applause at Buffalo Wild Wings are tied to the giddiness of enthusiastic sports fans.

But last Thursday night, a packed house at the Ironton restaurant cheered the youngest son of Sonny and Phyllis Turner, a member since 1990 of one of the grandest teams of all – The U.S. Army.

Lieutenant Colonel John Turner, a 1988 Ironton High School grad, was introduced to the patrons as part of a surprise celebration planned by his lifelong friend Brad Markins in recognition of his service to our nation.

“Welcome home from Iraq, after his second tour, John Turner from Ironton, Ohio,” the P.A. system announced prior to Markins delivering a key to the city and a proclamation to his buddy from Mayor Rich Blankenship declaring Dec. 29, 2011, “Lieutenant Colonel John Turner Day” in the city of Ironton.

A standing ovation ensued. Strangers walked over to shake his hand. Friends and former classmates mingled, awaiting their opportunity to catch up with the hero they’ve known since childhood.

Taking a break from a conversation with Kelvin Ford and John Thompson about their days on the gridiron for the Ironton Fighting Tigers, Turner noted his surprise by the reverie.

Humility, it seems, is as much a part of this career soldier’s uniform as is sacrifice.

“This means a lot,” he said, turning the accolades back toward his wife, former Coal Grove native Denise (Morgan) Turner.

“She’s been through a lot,” he said, noting Denise’s dedication not only to him, but to their two children, 12-year-old Morgan and 7-year-old John, Jr., through frequent cross-country moves and overseas deployments, which includes John’s two stints in war.

“I wouldn’t be where I am without her,” he said.

“They sent care packages to us when I was in Iraq, and it really meant a lot,” he said, a topic he revisited several times for emphasis.

“It’s great to see kids do things like that at such a young age.”

Along with Markins, Ford, and Thompson, other friends on hand to kick off the party included Cindy (Corn) Pack, Cindy Clay, Chris and Tricia Thompson, Brenda Thompson, Michael Reeves, John and Jennifer Willis, Kevin and Tammy McCown, Toni Henry, Lou and Sandy Cloran, Don Townsend, Mark Willis, Frank Wilson, and MaryBeth (Miller) Scherer. Many others joined in throughout the evening.

Turner and his family will return to his present assignment at Fort Riley, Kansas, where he serves as executive officer to the garrison commander.

With him, he’ll take his key to the city of Ironton and the many memories made on a day his hometown set aside in special recognition of his name.

He’ll also have the knowledge that his many friends are enamored by his accomplishments in life, as well as his courageous sacrifices for their country.

“He’s a true hero,” Markins said at the party, watching his buddy bounce from table to table sharing stories and laughs. “What he’s done is really impressive. Obviously, we’re all very proud of him.”

New Year’s Day is the perfect time to reflect on the year that was and how it impacted our lives.... read more