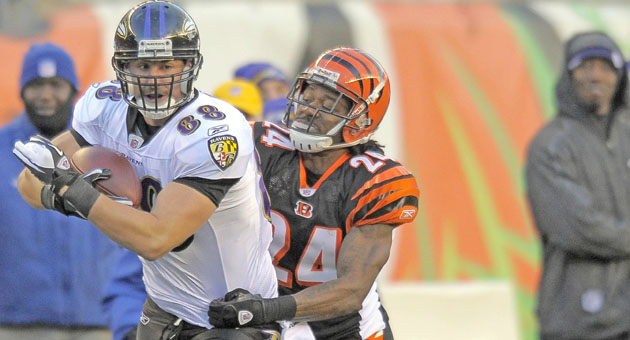 CINCINNATI — Andy Dalton’s desperate pass into the end zone fell incomplete in the scrum of players, leaving the Bengals still winless against playoff teams this season.

The Bengals got a lot of help on Sunday, clinching the final AFC wild card despite losing to the Baltimore Ravens 24-16 in front of a capacity crowd at Paul Brown Stadium. The Ravens (12-4) clinched the AFC North title with a 6-0 mark in the division.

The Bengals (9-7) got their third playoff spot in the last 21 years when the Jets and Broncos also lost. Denver’s score flashed on the videoboard with 36 seconds left in the game, drawing a loud cheer from the crowd.

Players got congratulatory hand slaps from fans as they left the field, but that was it for the celebration.

“It’s kind of weird,” said Dalton, who was 22 of 44 for 232 yards with no interceptions or touchdowns. “Obviously we didn’t get it done today, but we still have a chance.”

Cincinnati went 0-7 against the other playoff teams this season. The Bengals will play Saturday at Houston, which donned caps and shirts in celebration of the AFC South title after beating the Bengals 20-19 at Paul Brown Stadium on Dec. 11. Dalton is 3-0 at Reliant Stadium, where he played two games in high school and one at TCU.

“We’ve been successful up until this point, and we’ve got a shot in the playoffs,” Dalton said. “We’re in it. Now it’s what we do with it. I think everybody’s got the right attitude.”

The Ravens got the AFC’s No. 2 seed and a first-round bye followed by a game at home, where they’re 8-0 this season. They celebrated their title by donning championship shirts and caps in the locker room.

“To be able to win the division on the road to secure a home playoff game — the feeling in that locker room was like no other,” said Ravens running back Ray Rice, who led the way with two long touchdown runs.

Rice made the biggest plays on a blustery afternoon that made it tough to throw. He had a career-best 70-yard touchdown run on the fourth play.

Rice also broke a 51-yard touchdown run on a third-and-1 play with 5:41 to go, essentially finishing Cincinnati’s chances of yet another big comeback. Rice finished with 191 yards on 24 carries and set a club record with his 15th touchdown of the season.

Baltimore’s defense had a big hand in it, too. Linebacker Terrell Suggs hit tight end Jermaine Gresham after a catch, jarring the ball loose. Three plays later, Rice went 51 yards to put the Ravens on the verge of a title.

Suggs sacked Dalton, forcing the Bengals to settle for a field goal on their next possession. Cincinnati got the ball back at its 20 with 1:05 to go and no timeouts left. The game ended with Dalton’s desperation pass into the end zone.

During that final, futile drive, the Broncos’ score was shown on the videoboard, drawing a loud cheer from the crowd of 63,439.

“I heard the crowd and I asked somebody, ‘Was there a penalty on that play?”’ cornerback Nate Clements said. “He said, ‘Denver lost. We’re in.’ I still wasn’t sure. Then we came into the locker room and they confirmed it.”

Ravens players raised their arms in triumph as they ran off the field after Dalton’s final pass. They made home-field advantage for the playoffs an overriding goal after having to play on the road each of their last three years in the postseason.

The Bengals stayed in playoff contention by pulling off comebacks, overcoming double-digit deficits in the second half three times. They put themselves in position for another one when Bernard Scott broke a 25-yard touchdown run late in the third quarter. Mike Nugent’s 46-yard field goal cut it to 17-13 early in the fourth quarter, but that was all they managed.

The Bengals reached the playoffs despite losing all of their games against playoff-caliber this season — two each against Baltimore and Pittsburgh, and against Houston, Denver and San Francisco. They lost five of their last eight games, but got the wild card with the help of the Jets’ late-season collapse.

Notes: The Ravens also won the division in 2003 and 2006. … Rice joined Hall of Famer Marshall Faulk as the only players with 1,000 yards rushing and 700 receiving in more than one season. … Suggs has a career-high 14 sacks, one shy of Peter Boulware’s club record from 2001. … Ricky Williams carried six times for 28 yards and became the 26th player in NFL history to run for 10,000 career. … K Billy Cundiff was back after missing one game with a sore left calf. He made a 42-yard field goal into the wind. … It’s the third time in the last four years that an AFC North team went 6-0 in the division — Pittsburgh did it in 2008 and Cincinnati in 2009. … Bengals K Mike Nugent made three field goals, giving him a team-record 33 for the season. … The Bengals haven’t won a playoff game since 1990.

The Associated Press   JACKSONVILLE, Fla. — Ohio State and Florida have been two of college football’s most consistent programs... read more