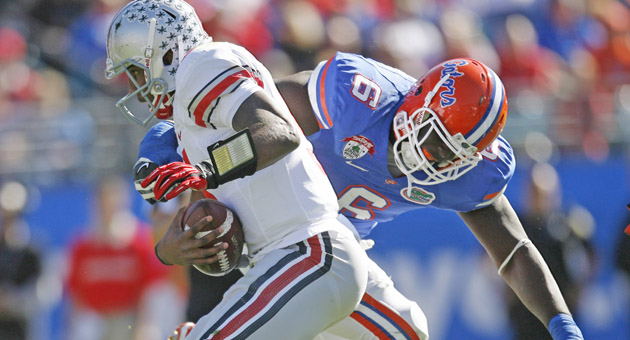 Ohio State quarterback Braxton Miller (5) tries to elude the tackle of Florida defensive tackle Jaye Howard (6) during the first half of the Gator Bowl on Monday. (The Ironton Tribune / MCT Direct Photos)

And there’s no doubt Meyer will spend the next eight months reminding his new team what happened in Jacksonville.

The Buckeyes gave up two touchdowns on special teams in a 24-17 loss to Florida in the Gator Bowl on Monday, clearly the difference in a game between Meyer’s former and future teams.

Andre Debose returned a kickoff 99 yards — the longest scoring play in bowl history — and Chris Rainey blocked a punt that was returned for a touchdown.

The speedsters helped the Gators (7-6) avoid their first losing season since 1979 and pick up some much-needed momentum after losing six of their previous eight games.

“When you have two good teams play each other, it’s usually special teams that will make the difference,” Ohio State cornerback Tyler Moeller said. “That’s what it was today.”

Meyer officially takes over at Ohio State this week and surely will make it a priority to improve special teams. Meyer did that in his six seasons in Gainesville, and Rainey and Debose were two of his most prized recruits.

“The two touchdowns on the special teams play were tough,” Buckeyes center Mike Brewster said. “It’s demoralizing. It’s like a free touchdown. But we had a lot of young guys in there. We had some injured guys who weren’t in there, and the people we had in there did the best they could.”

Ohio State fell to 0-10 in bowl games against teams from the Southeastern Conference. Yes, the Buckeyes beat Arkansas in the Sugar Bowl last year. But that victory was vacated.

The latest loss had a lot to do with Florida’s speed.

The Gators dominated the defensive line of scrimmage. They had a season-high six sacks, harassing Braxton Miller on nearly every passing play. Jaye Howard and Sharrif Floyd were disruptive all afternoon.

“Give (Florida) a lot of credit for calling those blitzes, some of those we had not seen before,” Brewster said. “We didn’t do a good job of adjusting to them. It’s tough to adjust to new schemes like that during a game.

Debose and Rainey proved to be game-changers in the much-hyped rematch that centered around Meyer.

Just after Ohio State tied the game at 7 on Miller’s 5-yard pass to DeVier Posey in the second quarter, Debose took the kickoff, made one cut to the outside and went untouched for his third career kickoff return for a touchdown. The Buckeyes never got close enough to even swipe at him, let alone make the tackle.

“It meant a lot to me,” Debose said. “I just tried to do anything that I can do to help the team. … There is no feeling like it.”

Florida was up 14-10 at halftime and essentially put the game out of reach on the opening possession of the third.

Rainey came off the left end and blocked Ben Buchanan’s punt. Seldom-used linebacker Graham Stewart scooped it up at the 14-yard line and scored the first touchdown of his career.

It was Rainey’s sixth blocked punt of his career, breaking the school and SEC record.

Rainey also ran for 71 yards on a warm and sunny day in Jacksonville. John Brantley completed 12 of 16 passes for 132 yards, with a touchdown and an interception. He had a 17-yard strike to Deonte Thompson in the first.

Miller completed 18 of 23 passes for 162 yards and two touchdowns. He also ran 15 times for 20 yards. He completed an 11-yard TD pass to Jordan Hall with 57 seconds remaining. The Buckeyes failed to recover an onside kick, and Florida ran out the clock for its sixth bowl victory in the last seven years, including four in a row.

“This whole season was a learning process,” Miller said. “I learned as the season went on. I could have played better. I’m anxious to get going for next year.”

CINCINNATI (AP) — The Bengals had seven chances to beat a top-tier team during the season, and lost all seven... read more