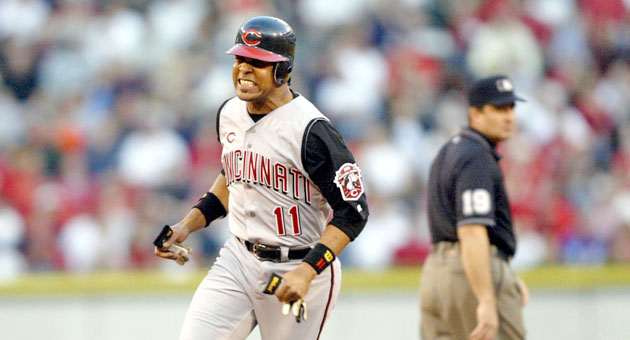 NEW YORK (AP) — Barry Larkin had no idea back in 1982 that he would become a baseball Hall of Famer thanks to Bo Schembechler.

A two-sport standout in his senior year of high school, Larkin went to the University of Michigan on a scholarship to play defensive back for Schembechler’s Wolverines. When he arrived in Ann Arbor, Larkin learned he was being redshirted.

“I was a better football player than a baseball player at the time,” Larkin recalled. “And that was influential because I just worked on my baseball talent, just that alone. And that was an eye-opener because I got so much better.”

So much better that he was elected to the Hall of Fame on Monday with plenty of room to spare. The former Cincinnati Reds shortstop was chosen on 495 of 573 ballots (86 percent) in voting announced by the Baseball Writers’ Association of America, well above the necessary 75 percent. Larkin was on the ballot for the third time after falling 75 votes short last year.

He will be inducted July 22 in Cooperstown along with the late Ron Santo, elected last month by the Veterans Committee.

His election came in the final year before the Steroids Era becomes the main focus in balloting.

Jack Morris followed Larkin with 382 votes (67 percent), missing by 48 votes on his 13th try but up sharply from 54 percent last year. Morris, the ace of three World Series winners, finished with 254 victories and was the winningest pitcher of the 1980s. His 3.90 ERA, however, is higher than that of any Hall of Famer.

He has two chances left on the BBWAA ballot. Gil Hodges (63.4 percent in 1983) has the highest percentage among players who never gained election.

Larkin’s brother Mike, who was a year older, was recruited by Schembechler but decided to follow coach Gerry Faust from Archbishop Moeller High School in Cincinnati to Notre Dame.

“So Bo told my mother that he was going to get her next son,” Larkin said.

Larkin became a baseball star at Michigan, which retired his No. 16 two years ago. He developed under coach Bud Middaugh and assistant Danny Hall, who is now Georgia Tech’s coach.

“Those two guys really beat it in my head the correct way to play the game,” Larkin said. “Because neither was a home run hitter, neither one was one of the most gifted, if you will, they were both very good at the Xs and Os, at the hitting behind the runner, at the mental part of the game.”

Cincinnati, which drafted Larkin in the second round in 1982, took him with the fourth overall pick in 1985. Schembechler, who became president of the Detroit Tigers, used to kid Larkin about his career path.

“Bo always told me he would strike me out, anyway. That was Bo’s way of saying, ‘Congratulations kid, you did it,”’ Larkin remembered. “He would always tell me: ‘You’ll be back. You’ll miss football. Nobody comes to the University of Michigan to play baseball,’ is what he used to say.”

Larkin becomes the fourth Hall of Famer with ties to the university, following Branch Rickey (who coached the baseball team while attending the law school), George Sisler and Charlie Gehringer. Looking back, Larkin feels fortunate.

He got 52 percent when he appeared on the ballot for the first time in 2010. This year, he received the largest single-year percentage increase to gain election since 1948, when pitcher Herb Pennock was elected with 77.7 percent, a year after finishing with 53.4 percent.

Larkin is the 48th Hall of Famer who spent his entire career with one major league team and the third from the Reds, joining Johnny Bench and Bid McPhee. He credits Tony Perez and Dave Concepcion for helping influence his career, and recalled fondly how he learned Spanish to better communicate with his teammates.

Bernie Williams received the most votes (55) among players who were eligible for the first time. Bill Mueller got just four votes and will be dropped in future years, along with Juan Gonzalez (23) and Vinny Castilla (six). Nine voters submitted blank ballots.

Mark McGwire, 10th on the career home run list with 583, received 19.5 percent in his sixth try, down from 19.8 percent last year and 23.7 percent in 2010 — a vote before he admitted using steroids and human growth hormone.

Rafael Palmeiro, among just four players with 500 homers and 3,000 hits along with Hank Aaron, Willie Mays and Eddie Murray, got 72 votes and his percentage increased to 12.6 from 11 last year in his first appearance. Palmeiro received a 10-day suspension in 2005 for a positive test for performance-enhancing drugs, claiming it was due to a vitamin vial given to him by teammate Miguel Tejada.

Gonzalez, a two-time AL MVP implicated by Jose Canseco in steroids use, received 30 votes last year, just above the 5 percent threshold for remaining on the ballot.

In 2014, the focus will turn to elite pitchers when Greg Maddux (355 wins) and Tom Glavine (305) become eligible. Among pitchers eligible for the Hall, all 20 of the 300-game winners are in.

The Associated Press   NEW ORLEANS — The Rematch of the Century, it wasn’t. For Alabama, it was good enough... read more