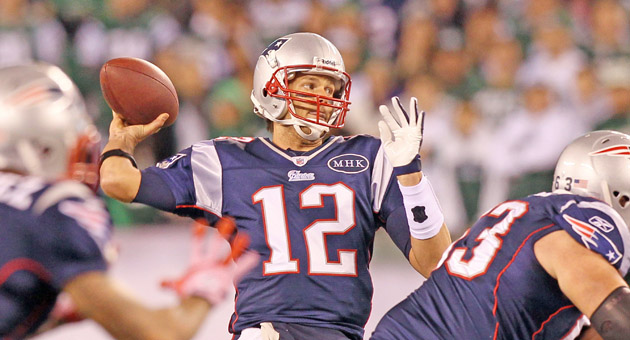 New England Patriots quarterback Tom Brady (12) threw for a record six touchdowns in a 45-10 rout of the Denver Broncos in the AFC playoffs on Saturday. Brady also had a record five TD passes in the first half. (The Ironton Tribune / MCT Direct Photo)

Brady threw six touchdown passes, five in the first half, putting the New England Patriots into the AFC championship game after roughing up Tim Tebow and the Denver Broncos 45-10 Saturday night.

The Patriots (14-3), winners of nine straight games, will host either Baltimore or Houston next Sunday for a spot in the Super Bowl. Saturday night’s romp snapped a three-game postseason losing streak, two of those at Gillette Stadium, and lifted the Patriots to the verge of their fifth Super Bowl appearance in 11 seasons. They’ve won three of those.

“We came in and started fast and it was a big win for us,” said Brady, who even got off a 48-yard punt on third down.

From the first snap, this was a mismatch. The Patriots were not going to make the same mistakes the Steelers made against this team.

A nation transfixed by Tebow’s play, if not his principles, tuned in Saturday to see if he had more heroics in store for Brady and company. He had nothing left as the Patriots made this must-see TV only for those who live in New England.

With New England up 42-7, the fans began their derisive Teeee-bow chants. On the next play, the Broncos quarterback was sacked for an 11-yard loss — one of five sacks for New England’s 31st-ranked defense.

And so ended one of the season’s most exciting story lines — one that began when Denver was 1-4 and made Tebow a starter. The one-time third-stringer promptly won six in a row and seven of eight, with a string of stunning comebacks. That surge ended with a 41-23 home loss to New England, and the Broncos dropped their next two, backing into the AFC West title.

But they rebounded nicely in their first playoff game since the 2005 season with the longest overtime touchdown in playoff history, an 80-yard catch and run by Demaryius Thomas against the Pittsburgh Steelers. Like everyone else on the Broncos’ offense, Thomas was invisible against the Patriots.

Denver couldn’t cover or tackle All-Pro tight end Rob Gronkowski, who tied a postseason mark with three touchdown catches, all in the opening half. Brady toyed with the Broncos (9-9), throwing more TD passes than Tebow had completions (three) in the first 30 minutes.

“We were playing complementary football, and it was awesome,” Gronkowski said.

Brady’s sixth TD was to his other tight end, Aaron Hernandez, as the quarterback tied Steve Young and Daryle Lamonica for the most in a postseason game.

The two-time league MVP threw for 5,235 yards during the season, second in NFL history to Drew Brees’ 5,476 in 2011. He looked ready to get that much against the Broncos as he moved to third place in career touchdown passes in the playoffs with 36, trailing Joe Montana (45) and Brett Favre (44).

The Broncos won the coin toss and elected to defer. Bad idea: They never were in the game after that.

Brady hit his first eight passes for 79 yards and two touchdowns. Offensive coordinator Bill O’Brien, who’s leaving to become Penn State’s coach once the Patriots are done, threw in a wrinkle by using Hernandez as a running back. On one of those plays, Hernandez broke free down the left sideline for a 43-yard gain, the team’s longest run this season.

But with the ball in his hands and a 14-0 lead, Brady momentarily stumbled. His throw over the middle for Julian Edelman sailed directly to safety Quinton Carter, whose weaving return set up Denver at the New England 24.

Carter left the game moments later with a neck injury; Denver was already without strong safety Brian Dawkins with a neck problem. And it’s secondary had no chance without them.

Yes, Brady had cooled off in the 24-degree temperature (wind chill of 12), but only for a while.

Using the no-huddle, and aided by an effective running game, Brady hit three passes for 31 yards, with Gronkowski getting free over the middle this time for the 12-yard score. Several times, and not just on his romps into the end zone, Gronkowski simply shoved aside would-be tacklers to tack on yards after catches.

Brady’s TDs covered 10, 12 and 19 yards to Gronkowski, 7 to Wes Welker, 61 to Deion Branch and 17 yards to Hernandez early in the third quarter. Coach Bill Belichick wasn’t about to back off at that point, but the Patriots stalled inside the Denver 5 early in the four period and Stephen Gostkowski made a 21-yard field goal to conclude New England’s scoring.

Hernandez left in the fourth quarter with a head injury.

“He’s feeling great,” Gronkowski said. “Hernandez is a beast and I love playing with him and everything.”

Caught smuggling tobacco   Instead of being half way through his six-month jail sentence, a Huntington man will spend the... read more