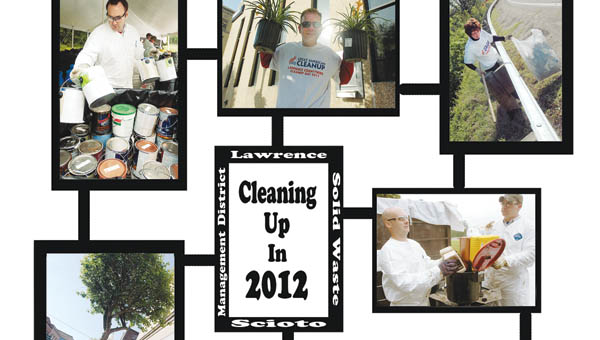 If all the cleanup work goes as planned, 2012 will be another big year for the Lawrence-Scioto Solid Waste Management District.

If all the cleanup work goes as planned, 2012 will be another big year for the Lawrence-Scioto Solid Waste Management District.

Director Dan Palmer said his agency is offering all of the programs it offered last year including one new program: E-waste day.

Palmer said the date for it has not yet been set but he wants people to know now so they can plan ahead to bring their unwanted electronics.

“We’ll take keyboards, printers, monitors, laptops, and it will all be free,” Palmer said.

The solid waste district will announce its “Kudos For Caring” recipient in March. This award is given to a group or citizen who makes a difference in cleaning up the county, recycling or a related area.

In the past, the award has been given to Betty Guthrie, who leads the First Presbyterian Church recycling program.

The National Drug Takeback Day will be Saturday, April 28, at the Greater Lawrence County Chamber of Commerce area off U.S. 52 in South Point. The solid waste district will participate.

The takeback hours will be 10 a.m.-2 p.m. Last year was the first time the drug event was offered and Palmer said he is pleased with how well it was received.

“We collected over 35 pounds of pills last year,” Palmer said.

The county-wide cleanup day will be Saturday, May 5.

“We’ll be sending letters out in February to all the groups who participated last year, telling them we hope they’ll join us again this year,” Palmer said. “And new groups are welcome.”

Palmer said the point of the shred day is to allow people to dispose of documents they have but don’t need in a secure manner so their personal information doesn’t fall into the wrong hands.

“We had 47 cars come through,” Palmer said. “And the people who attended were so appreciative. They had check books and bank statements and things they didn’t want other people to get ahold of.”

A date for the shred day will be announced later.

The annual household hazardous waste event will be Saturday, Sept. 29, at the Dow Chemical plant in Haverhill.

This event allows people to safely dispose of paint, household chemicals, pesticides and other items that can’t be simply thrown away with the kitchen garbage.

“We had 322 cars come through,” Palmer said. “That was a record. And we had to start 20 minutes early because the cars were double-lined on County Road 1A.”