Reds excited with chances this season 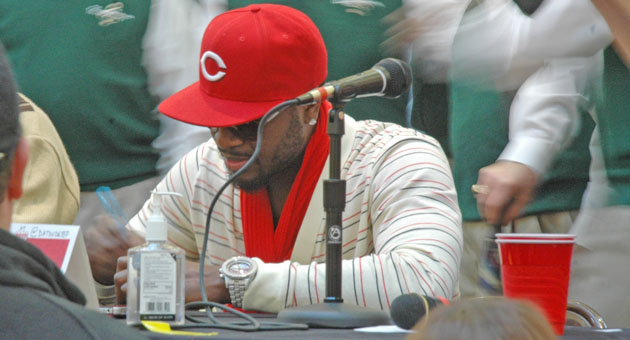 HUNTINGTON, W.Va. — They say you can never have enough pitching.

Jocketty made some key acquisitions during the off-season as he stockpiled pitching to strengthen the Reds’ chances of winning the National League Central Division.

Those acquisition have Reds’ players and fans excited about the upcoming season and the team personnel making the southern swing of the annual Reds Caravan were bubbling with anticipation regarding 2012.

While the Reds have been stocking up on talent, Central Division champion Milwaukee lost slugger Prince Fielder to Detroit and World Champion St. Louis’ best player and Reds’ killer Albert Pujols signed with Anaheim. Both were free agents.

“The other teams have come back to the pack,” said Reds’ Hall of Fame play-by-play announcer Marty Brennaman who is beginning his 39th season in broadcasting.

“No team has improved more than the Reds. There’s no reason why this club can’t be a contend all season.”

“I believe is Walt and I believe in Dusty,” said Phillips. “Getting Latos, Madson and Marshall shows we’ve looking to make a move and bringing us a championship. I fell like we’re going to do something big.”

“If you’re a Reds’ fan you should be excited,” said Reds’ TV color analyst Chris Welsh. “It looks like this is the year the Reds are going for it. They have one of the best — if not the best — bullpens in the whole league.”

Phillips said the Reds might be the favorite, but he knows the others teams in the division will make Cincinnati earn its championship.

“Those are still good teams and with the Pirates you never know what can happen. They were beating us last year,” said Phillips. “But we’re going to turn a lot of heads.”

Pitchers and catchers report Feb. 19 to the training camp in Goodyear, Ariz., with the full squad set to begin Feb. 24. The first spring training game is March 3 and the regular season starts with the opener against the Miami Marlins at 4:05 p.m. at Great American Ballpark.

Ironton Lady Fighting Tigers' guard Emily Davis drives for a layup as she scores two of her 11 points in... read more