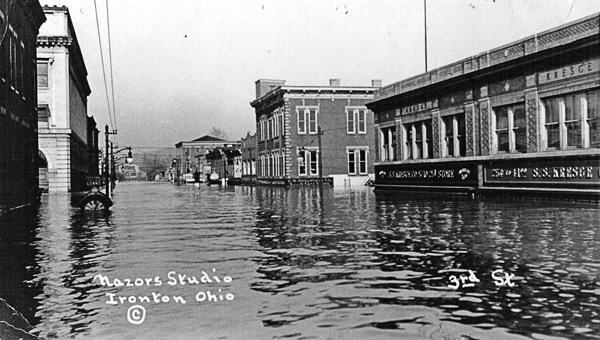 Nellie Grace Herald sat on a couch in one of the big houses on Fifth Street with a dog by her side and watched the river rule.

A private duty nurse caring for Nellie Marting Lowery, widow of Dr. Andrew Lowery, Herald writes to her family on Jan. 24, 1937, three days before the mighty Ohio crests in what historians call the greatest — and worst — flood to ravage the Ohio River Valley.

For 11 days the 1937 Flood paralyzed communities along its path.

“Things look terrible to me,” Herald writes. “Everyone says it is bad as the 1913 Flood. We get the news over the radio every hour. The water is still raising. I sure do

hope it will stop soon. The water is up at the corner of 5th St. in front of us. They said last night just the top of Dr. Hunter’s house could be seen.”

For 20 days, starting Jan. 5 the rains came, drenching the river with a total of 12 inches of water. That, added to December snows, sent the Ohio into its tailspin, sending

it 19 feet above flood stage. But those facts interest only historians as decades later they put together their accounts.

What mattered to Herald was when would the fierce waters retreat. Until then, for her and those around her, days meant discomfort, fear, fights for survival and much prayer.

“It is hard for us to envision that in the 1937 Flood, there was one working phone and it was in the courthouse,” Ironton attorney Craig Allen said.

The man in charge of that phone was his father, Enoch Allen.

“He was assigned to that phone,” Allen said. “There was the problem that you had people trying to communicate out, but you also had the National Guard in town. He basically had to restrict usage.”

There were 230 National Guardsmen dispatched to Ironton, according to the only printed account of the disaster during those days, “The Flood Chronicle.”

Before it was over there would be $3 million in damage for the county; 12,000 homeless in Ironton; 1,500 homeless in Coal Grove; two Ironton store buildings leveled by the rushing waters; and 100 homes in Ironton, Coal Grove and Hanging Rock washed away.

Dr. Burton Payne was living in Waterloo when the flood hit. Although only 7, he remembers the heroism and ingenuity his father, A. J. Payne, also a medical doctor, exhibited to care for his patients.

“He had a patient with an appendicitis,” Payne said. “They had to work out a relay system. They could go so far in a car, then in a boat, back into a car and then into a boat to get the patient treated. That always impressed me and I wanted to be a doctor.”

For his future wife, Leona Payne, who lived in a one-story house at Ninth and Vine streets, the flood turned her front yard into a playground.

“I was excited. I thought it was fun,” she said. “I wanted to go out and wade in the water.”

Knowing he would have to get his family out, Payne’s father, nailed boards high up on the living room walls to hang their furniture out of the water’s reach, hoping it would be there to salvage when the flood subsided.

“I remember a boat coming up to the porch,” Payne said. “We stayed overnight at a house on Campbell Drive. I remember this whole big group of people sitting in one room. The next day my dad came and got us. He had been busy all night rescuing people. At the end of Campbell Drive was a car that took us to the country.”

With Fourth Street inundated, the two main newspapers were out of business. The first printed account of the disaster came about when Peter A. Burke and James L. Smith took over the printing equipment at the Ironton school board office to publish the one-page “Flood Chronicle” on Jan. 28.

From that readers learned 20 percent of the homes in West Ironton had washed down river; that State Rep. William Whetro hitchhiked to Columbus to get a quarter of a million dollars in flood relief for Lawrence County; that the Ironton Broadcasting Station was the city’s one link to the outside world.

Readers also could discover a face in the disaster as they read accounts like that of James Miller, forced to move six times because of the waters, died the day before the river crested. On Jan. 27, the day he was buried, his home washed away.

Or how the Wagner Funeral Home became the headquarters for the city’s fire department; or how an unnamed Samaritan from Gallia County supplied a pump that kept the furnaces working at the Marting Hospital.

Upriver, the struggles in the villages of Proctorville and Chesapeake were much the same as those in the county seat. People snaked up the walkway of the old Sixth Street Bridge for a few minutes’ use of the phone in the tollbooth, the only one operating in the eastern end of the county.

Betty Burcham’s father and grandfather dedicated their ferry business to the rescue cause. They even turned the family home over the Red Cross to use as a headquarters.

“The ferry boat docked where Hobbyland is now, taking milk and stuff from the farms in Ohio over to Huntington,” Burcham said. “My Dad had a marine radio station and could tell people where the boat was.”

Seventy-five years ago today, the river waters began to recede, inching back into its banks. The displaced came home to save the remnants of houses, of lives, ever mindful that a second disaster could lay ahead — typhus.

“There will be a great supply of serums for antitoxins, typhoid prophylaxes, etc., and every precaution must be taken to prevent the outbreak of an epidemic that would cost the lives of many hundreds of our people,” the “Flood Chronicle” states.

However there were no reports of deaths by typhus only hundreds and hundreds of families working for months to retrieve their lives.

Veronica Gleichauf Thistle was a senior at St. Joseph High School when the flood struck. Soon as the rains hit, their home at 1012 S. Fourth St., was inundated with the dirty Ohio.

“The water was several feet above the tallest window,” Thistle said. “It was a horrible experience. We had to move first to my grandparents and then a friend of my Dad’s found a place where we could go on Ninth Street.”

Just as tough was when the Gleichauf family got to go back to Fourth Street.

“There was a lot of damage when we could go back,” Thistle said. “The Red Cross came in and I remember they gave us a new mantle and linoleum for the kitchen floor.”

It took until summer before the family could turn that house into a home again, much time and many more tears, Thistle remembers

Redmen get running as they stop Flyers late rally