The Green High School Band is involved in a fundraising project to raise money for new uniforms.

The fundraiser has two main goals. The band is trying to compensate for increasing enrollment and it is trying to update the uniforms, which are around 20 years old.

“Our enrollment in the high school band is increasing to the point where we will no longer have enough uniforms for each student,” Adam Phillips, band director, said. “Our current uniforms are also a dark forest green and we are trying to get a uniform jacket that is our true color, Kelly Green, which we feel will look more modern and help boost the overall image and moral.” 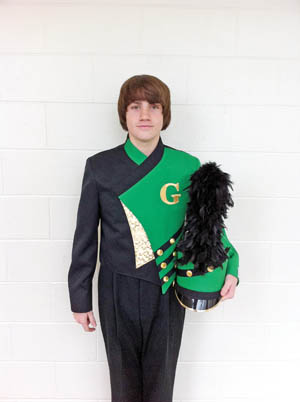 This past year, there were approximately 43 students in the high school marching band. This coming fall, the band is expecting between 60-65 members.

“Band is becoming increasingly popular in our schools,” Philips said. “It shows at all the grade levels. In sixth grade, there are only 48 students in the entire grade. I currently have 37 of them enrolled in band.”

The band is trying to raise enough money to purchase 70 band jackets and hats, which will cost about $300 per student. The total cost will be around $21,000 and they must have at least $10,500 by April 15 to ensure that they will have the uniforms by the start of the marching band season in September.

“We are currently looking into some fundraisers for the coming spring months that will hopefully bring in some donations relatively quickly,” Phillips said.

The band students sold pies at Thanksgiving, fruit at Christmas and they are currently finishing up basketball concessions. The money raised from all of the fundraisers has gone towards the purchase of the uniforms.

“We are still a long way from our goal,” Phillips said.