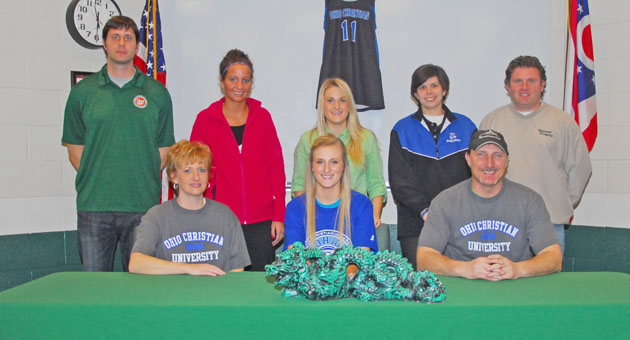 PROCTORVILLE — Maybe you can have your cake and eat it, too.

Fairland Lady Dragons’ senior point guard Katie Fuller is going to get to do everything she wants at the college level after signing a letter-of-intent with the Ohio Christian University Trailblazers on Wednesday.

“I’m really excited to play for a new team. I’ll miss my old team,” said Fuller. “I just hope I can grow in my faith and get a good education and play the sport I love.”

The 5-foot-7 Fuller has been running the point this season as the Lady Dragons have ran off 16 straight wins for the first time in school history. Coach Jon Buchanan said Fuller has been a key factor because she has accepted her role.

“I believe they’ll use her the same way we do,” said Buchanan. “It’s not about being a scorer with her. She plays defense and she’s a leader. She’ll play defense and be a ball-handler. They won’t have to make her work hard.”

Wray said Fuller is a perfect fit for the program.

“She’s really athletic and fast and plays really good defense. She can handle the ball and shoot the three and she can drive and dish,” said Wray. “She’ll be able to come in and play right away. She plays with a lot of energy.”

Fuller said she understands her role and she embraces it.

“Defense is just what I like to do. I like to play defense. That’s my favorite part. I leave the scoring to someone else. I start it and they finish it,” said Fuller.

Fuller is the daughter of Cathy and Steve Fuller.