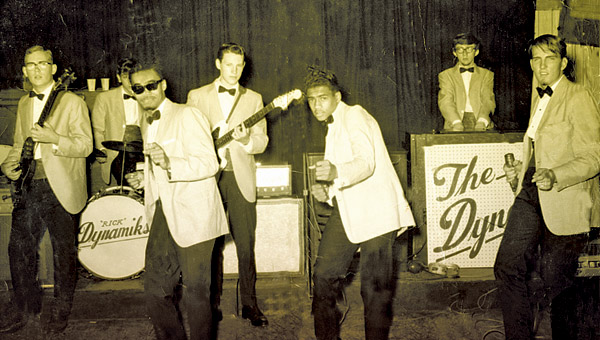 Lorenzo Batts Jr., first row center, performs with The Explosive Dynamiks during its heyday in the 1960s and 1970s.

She calls her show a love story interrupted by war. But “Snapshot,” Mitzi Sinnott’s one-woman drama, is a multi-layered portrayal of what it means to have a schizophrenic father and to search for a parental love forever elusive to her.

As a child her father’s actions could frightened her. But then Sinnott was little more than a toddler, aching for the family normalcy she saw around her, but always frustrated.

“It was very strange for me as a little girl,” Sinnott said. “When you are around mentally ill people, it was scary. I wanted to know him and wish he could reach out to me, but he couldn’t.”

When Elvis ruled and the Fab Four flourished, Lorenzo Batts, Jr., was the Tri-State’s version of pop music royalty as a vocalist for “Explosive Dynamiks.” Concerts by the group were sold out and fans played their records hours on end.

“He was a very deep artist in Huntington,” Sinnott said. “He was really looked up to as an artist. That whole band era that was really big. But I never knew the cool, good-looking man. I only know the shell-shocked man. That is what broke my heart.”

One of those fans was a brunette named Yvonne Sinnott, known throughout the area for her popular and artistically demanding dance studio, Yvonne DeKay School of Dance in Ironton. They met, they fell in love and started a life together.

Then the war in Southeast Asia threw its net over Batts when the young man was drafted into the Army to spend tours of duty in Vietnam, just as Yvonne was carrying her baby girl.

After he was a discharged, Lorenzo lived in relative bliss with Yvonne and Mitzi in Hawaii, a locale he had discovered during his days in the Army. But happiness there was short-lived.

“The mental illness got progressively worse and progressed into schizophrenia,” Sinnott said.

Forced hospitalizations in VA centers led to a self-imposed exile back to Hawaii. It would be decades before Sinnott would track down her father. Facing the pain of knowing a father so different from the man her mother fell in love with is the driving force of the one-woman show the actress and arts educator has created and toured internationally.

“As a little girl, my mom was a strong lady and the kids at school would say, ‘We didn’t think about you needing a dad,’” Sinnott recalled.

School started out all right, but as she headed toward her teen years, racism began to rear its head.

It is that journey from a biracial child to a young woman who finally meets her father after decades of separation that is the focus of “Snapshot,” where Sinnott plays 15 different characters.

“When I finally saw him, I was devastated by what I saw,” she said. “I couldn’t believe this man’s life had been destroyed by war and here we were embarking on another war (in Iraq),” she said. “It was too much how public policy affects individual lives. … No family should unnecessarily be broken up like that.”

“Feelings are important but you are not allowed to be angry, to be hurt,” she said. “Those emotions are there for a reason. You have something to clean up. … Every time I tell the story and it is very emotional for me, it allows more of my grief to come out. It will always be sad that I didn’t have my life, but it doesn’t consume me. Releasing tears allows you to finally get to your joy.”

Snapshots will be presented at 7 p.m. Thursday at the Joan C. Edwards Performing Arts Center on Marshall University’s campus. Admission is free and the show lasts for one hour.

The story of Bethany Bibb is a testament of perseverance, faith and community support. And it looks to have a... read more