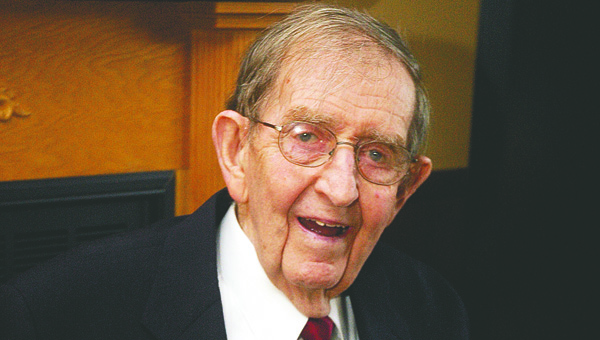 Harold Spears, longtime Ironton attorney, in August 2011, after learning he would receive the Honorary Life Fellowship Award from the Ohio State Bar Foundation for his lifetime of dedication to law.

Friends and colleagues reflected on the life and distinguished career of longtime Ironton attorney Harold Spears, who passed away Wednesday at the age of 92.

Sixty years after his legal career began, Spears’ legacy lives on, whether it be in his triumphs as a two-term prosecutor, in his leadership as probate and juvenile court judge, his decades-long service as an attorney and civic volunteer, as both a husband and a father, as a WWII veteran or as a man friends called an overall exemplary person.

Spears was recently given the Honorary Life Fellowship Award from the Ohio State Bar Foundation for his lifetime of dedication to law.

Current Lawrence County Prosecutor J.B. Collier Jr. shared an office with his grandfather and father across the hall from Spears’ office years ago when he was a young attorney.

“I have the highest respect for him as an attorney and a man,” Collier said. “All the accolades are well deserved as far as I’m concerned.”

“He did some remarkable work as prosecutor,” Collier said.

And that work started on day one, Spears once said when reflecting on his early career.

The sun hadn’t even come up on his first day as Lawrence County Prosecutor when Spears made good on his campaign promise to crack down on the gambling and vice that had plagued the county.

You would have only paid 5 cents to read all about it on the front page of The Ironton Tribune Jan. 3, 1953.

Five hours and 45 minutes after being sworn in as prosecutor, Spears and newly elected sheriff Carl Rose served their first search warrant that resulted in the seizure of 155 dismantled slot machines.

And it wasn’t just gambling. Spears and Rose were instrumental in the clean-up of the county, from raiding nightclubs and casinos and jointly investigating notorious murder cases to shutting down burglary rings as well as prostitution.

It was stories like these that would leave an impression on future attorneys in Lawrence County.

Assistant Prosecuting Attorney Mack Anderson remembers Spears as the man that lived up to his campaign promises all those years ago. Anderson’s grandfather-in-law was Carl Rose and Mack said he remembers the story of the slot machine raid and others that Spears and Rose tackled together.

“He was a top lawyer,” Anderson said. “He was a very competent lawyer and professional person. He was meticulous about cases. And he was like that as a prosecutor.”

Presiding Judge Charles Cooper remembers growing up in Ironton’s First United Methodist Church with the Spears family sitting in the pew in front of his. Before Cooper was even in law school, he spent summers training under Spears in investigative work on personal injury cases.

“Keep your desk organized,” Cooper said. “Don’t lose things on your own desk. It wasn’t unusual to see nothing but the Holy Bible on his desk. The second thing he taught me was to organize a file. He liked it to be organized reverse chronologically.”

“He was generous with things he thought would be helpful to young lawyers. And I know there are many of us who appreciate that and were helped by that,” Cooper said.

“I think the county will have a sense of pride, first of all, in his accomplishment as prosecuting attorney and the way he cleaned up vice and illegal gambling,” Cooper said. “But beyond that, I think his legacy will be to thousands of individuals that he represented in general practice matters.”

Ironton attorney Mark McCown knew Spears and said he was passionate about his beliefs, whether it be a belief in his client’s position, his own religious beliefs or the strength of the nuclear family.

“There is an exceptional void by his passing,” McCown said. “A large void that, quite frankly, cannot be filled. There are many politicians who pay lip service to what they want to do … He was a man of his word. Period. If he told you something you could unquestionably rely upon it.”

A memorial service will be at 11 a.m. Saturday at First United Methodist Church. Visitation will be from 6-9 p.m. Friday from at Phillips Funeral Home and an hour before the service.