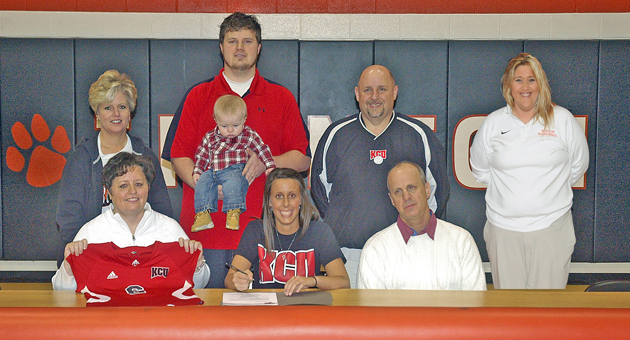 High school was good for Sarah Linn, but she sees an even better future at the college level.

After a successful career with the Ironton Lady Fighting Tigers, the senior volleyball standout is moving to the next level after signing a letter-of-intent with the Kentucky Christian University Lady Knights.

“I’m really excited about it,” said Linn. “It is really fun. It’s a very good program that went to the nationals last year.”

Bruce Dixon, the KCU 20-year veteran head coach, said he got a chance to meet Linn after talking with various coaches. He had a chance meeting with Linn when she was on a recruiting trip to Pikeville College.

“One thing led to another and we’ve been talking ever since.,” said Dixon.

Linn is the first recruit in Dixon’s 2012 class. The program is losing four seniors including two NCCAA All-Americans.

“We’re going to depend on her. I’ve got a young team and a young team’s opportunities are more prevalent. It will all depend on how they work and acclimate to the speed of the game,” said Dixon.

Linn is excited about the opportunity to play early but she knows there aren’t any guarantees.

“I’ll still have to work for my spot. It’s going to be completely different than high school. It’ll be a faster pace,” said Linn.

Dixon already has an idea where Linn will fit into his plans for next season.

“She’ll be more of an outside hitter but she does block at the net well and I value her versatility. I don’t like to pigeonhole anyone.”

Linn has been playing club ball in Columbus to help prepare her for the next level.

“I’m playing against a lot of girls who are playing Division I and Division 2. It’ll help me adjust to the speed of the college game,” said Linn.

Dixon — who has put together a very successful program at KCU — said Linn was the type of player he recruits.

“She has a good attitude. She’s a perfect fit for our program,” said Dixon.

Sarah — who plans to major in nursing — is the daughter of Mary and Jeff Linn of Ironton.

By JIM WALKER Tribune Sports Editor   SOUTH POINT — Rick Marcello is coming home and he has a job... read more