COAL GROVE — For many 12-year-olds, summer means school is out and vacation begins.

For Ansleigh Adkins, summer means a major surgery and months of recovery time.

“It basically means there are polyps that attack the intestinal tract,” said Crystal Adkins, Ansleigh’s mother. “Last year when we went to Cleveland she had about 10,000 throughout her intestinal tract.” 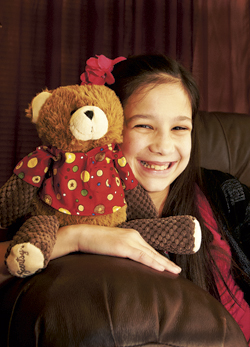 Ansleigh Adkins, of Coal Grove, is raising money to collect Scentsy bears, like the one shown, to be distributed to children staying at the Cleveland Clinic Children’s Hospital.

In June she will have a major surgery to remove her colon and most of her large intestine.

But, right now, Ansleigh isn’t concerned with her own surgery, but is instead thinking about the 36 other children in the Cleveland Clinic Children’s Hospital where she has gone for treatments.

“I thought about it one night, and I wanted to make other kids happy,” Ansleigh said.

Ansleigh said she asked her mother if she could take a stuffed teddy bear to give to the children’s hospital. From there, her project has grown into a crusade to raise money so each child could have his or her own bear, a goal she reached just Friday.

And the bears aren’t just any ordinary teddy bears.

Having met her goal, Ansleigh is still collecting money through the end of February to buy more bears to take to the children’s hospital in Huntington, W.Va.

Crystal said teachers and students at Dawson-Bryant Middle School, where Ansleigh attends, have been more than generous in their support of Ansleigh’s project.

Crystal said she wanted to make sure people understood Ansleigh’s condition is treatable, not terminal.

“We just want people to know it’s not about Ansleigh,” Crystal said. “Yes, she is going to have the surgery and have a long road ahead of her, but she is thinking of others at a time when they need a good friend to be with them.”