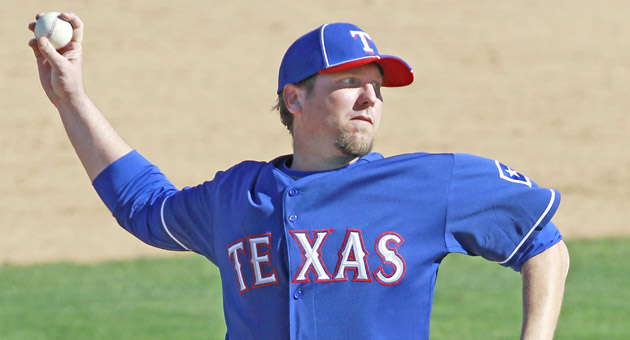 Pitcher Brett Tomko has signed a minor league contract with the Cincinnati Reds, his first major league team during a 13-year career. Tomko was part of the Reds' trade that sent him to Seattle for Ken Griffey Jr. (The Ironton Tribune / MCT Direct Photo)

GOODYEAR, Ariz. — Right-hander Brett Tomko is back with the team that launched his career, signing a minor league deal with the Cincinnati Reds as they opened camp on Sunday.

Tomko, who turns 39 on April 7, was invited to camp, which opened with all 36 pitchers taking physicals before a two-hour workout. Position players are scheduled to report for physicals and work out on Friday.

Tomko is a footnote to Reds history — part of the four-player package traded to Seattle for Ken Griffey Jr. on Feb. 10, 2000.

The Reds made him their second-round pick in the June 1995 draft. He reached the majors in 1997 and played three seasons with Cincinnati, going 29-26 with a 4.35 ERA in 86 starts and two relief appearances.

The right-hander has pitched for 10 teams during his career — Cincinnati, Seattle, San Diego, St. Louis, San Francisco, the Los Angeles Dodgers, Kansas City, the New York Yankees, Oakland and Texas. He was 0-1 with a 4.58 ERA in eight games for the Rangers last season, most of which he spent in the minors.

The Reds’ rotation and bullpen have a much different look this year. They traded four players to San Diego for right-handed starter Mat Latos, giving up first-round picks Yonder Alonso and Yasmani Grandal along with starter Edinson Volquez.

Unable to sign closer Francisco Cordero, they got closer Ryan Madson and acquired set-up man Sean Marshall, giving the back end of the bullpen a totally different look.

Cincinnati won the NL Central in 2010 and returned its roster virtually intact last season, then struggled to a third-place finish at 79-83. The Reds spent the offseason revamping a pitching staff that was the biggest problem.

Manager Dusty Baker, entering his fifth season in Cincinnati, likes the way his team looks as it opens camp.

“It boils down to the more talent you have, the better your chances are,” Baker said. “I genuinely like this team.”