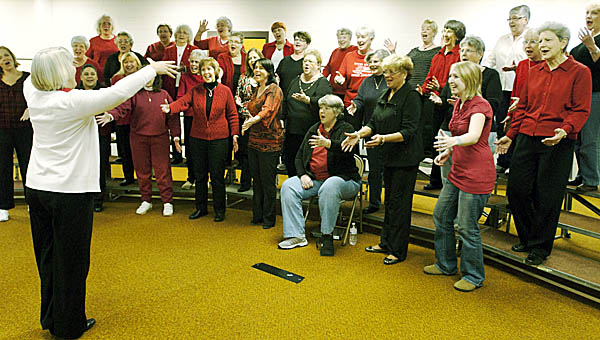 They stand on risers, delivering such classics as “In My Room” and gospel favorites such as “Dig A Little Deeper” with smooth, silky harmony. The smiles are real — these ladies are having fun. And the a capella voices are pitch perfect.

The ladies in River Magic, the Tri-State chapter of the Sweet Adelines, love what they do and it is as obvious to the listener as their talent. Right now the group is having a membership drive to encourage more women who love to sing to join them in spreading that magic.

The Sweet Adelines is a female chorus that sings barbershop-style music. An international organization that was started in 1945, there are some 600 choruses worldwide, according to River Magic member Carol Berry, of Chesapeake.

“Most of us have no formal music background,” Berry said. “So we learn by tapes, CDs or other learning tools.”

Right now there are 35 members in the local chapter.

Janice Palmer is in the process of joining. She likes to sing and sang in her church choir and decided this might be fun, too. She is joining because, in addition to her love for music, she also likes the camaraderie of the women.

“It’s more of a sisterhood than church choir,” Palmer said.

“Besides getting married and having children, this is the nicest thing that’s ever happened to me,” Daoust said, “They’ve helped me get through the stress of caring for elderly parents; they’ve been a support group and they’ve helped me really enjoy life. I don’t know what I’d do without the Sweet Adelines.”

Members come from all over the Tri-State, including more than a few from Lawrence County.

Carol Harmon, of Ironton, joined more than five years ago.

“My daughter called and told me they were having this thing at OU and I went with a friend and I listened and said to myself ‘Oh, I’d love to do that,” Harmon said. “It’s just one of those things you can’t put into words. I just knew I’d like it.”

Harmon said, when her husband became ill, her Adeline friends were a collective bulwark of support, something for which she is thankful.

Ruth Prater is from South Point.

“I became hooked quickly when I heard their pure tones and harmony. Everything I’ve learned has helped improve my voice,” Prater said.

Janet Jarrell is from Chesapeake. She suspended her membership to raise two sons and rejoined recently.

“I knew I’d be returning one day,” she said. “I missed it very much. Everyone is fun-loving and that makes rehearsal night so enjoyable.”

Beverly Miller has been director since 1996 and a member for much longer. In her day job, Miller is an accountant. But she’s always had a love of music and she has a musical background.

“I joined the choir in 1988,” Miller said. “I joined because it was fun and I needed a place to sing. It’s like a family. It’s like having your mother, your sister, your grandma and your aunt because of all the ages.”

A family? Miller may have a point: Carrie Baisden, one of the youngest members of the group met her husband, Jay, through the Sweet Adelines. Her aunt, Loretta Steele, who is also a group member, convinced her to come along to a rehearsal one evening. While she was there with Aunt Loretta, fellow Adeline Peggy Napier’s husband, Richard, told Carrie he wanted to introduce her to his nephew, Jay.

The young people met. They clicked. They married. That was a year and a half ago. The baby is due in August.

Music to the ears

And the thing about the Sweet Adelines is, there is no limit on membership; a group can be as big as the members want it to be.

“If you like to sing and want to have fun, this is for you,” Miller said.

The Sweet Adelines have a yearly concert; the date for the 2012 concert has not yet been scheduled. They also compete in a national contest in April. They also sing the National Anthem at ball games, sing at Christmas parties, dinners, weddings and occasionally with the men’s barbershop group, The Thundertones.

River Magic rehearses at 7 p.m. every Tuesday evening at the Huntington Renaissance Center (the former Huntington High School Building) at the corner of Ninth Avenue and Eighth Street in Huntington, W.Va.