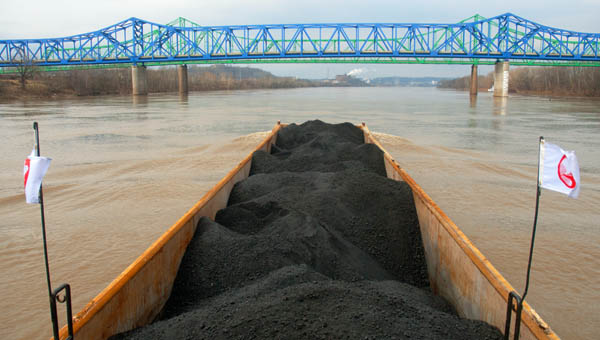 A compacted cockpit, a single restroom and no buffet, not exactly the ideal accommodations. But those are the conditions that Scott Depriest and Jim Hayes signed up for when they began working on barges on the Ohio River.

There are two crew members per boat. Depriest pilots the Chris Arden and down the river and Jim Hayes is the ship’s deck steersman. Depriest has been with McGinnis, Inc. for 20 years, while Hayes has been with the company for eight years.

The typical day for Depriest and Hayes begins early, ends late and is filled with constant trips along the Ohio River. They work 12-hour shifts, where they never leave the boat, and they alternate days and nights. They begin work on Monday at 5 a.m. and end at 5 p.m., they work seven straight days. After a four-day break, they work seven straight nights from 5 p.m. to 5 a.m.

“Today, we started out building a 15 barge load in the Big Sandy River,” Depriest said. “We take empty barges up to the Sandy River to be filled. After the cargo is loaded, we go back and pick up the barges. We decked the barge for four hours.”

Not every day is a quiet, typical day.

“One day another boat hit us and rolled our boat over,” Depriest said. “We had to be rescued.”

McGinnis requires everyone to wear a life jacket when they board the boat and anytime they are on the first deck.

The barge holds different cargo such as nitrate, coal and debris, they deliver to places like Ceredo, Mansbach Metal and AK Steel.

They will deliver 30 to 40 barges on certain days and they work the harbor in any weather conditions. McGinnis has four boats that will deliver barges.

“We get our orders from dispatch,” Depriest said. “Dispatch will receive a fax and they will relay the fax to the pilot.”

The deck steersman (deckhand) will go out and face up the boat, walk along the barge, and untie the barge from the rest of the load after tying the barge to the boat.

After the boat is secured with the cargo, the pilot calls traffic control to confirm that the area is clear. After they reach their destination, the deckhand will use three to six ties to secure the cargo.

To become a deckhand, a person has to go to a technical school for a month. Becoming a pilot is a different story.

“He (trainee) has to drive a boat under supervision of another pilot for 18 months,” Depriest said. “The pilot will then sign off and they send it to the coast guard for approval. You have to have three years experience before you can qualify to be a pilot.”

In a male-dominated profession, there are women pilots and deckhands.

“There are at least three women pilots and five women deckhands that I know of,” Depriest said.

“It’s a different experience the first time,” Depriest said. “Some people catch on quicker than other people and some people aren’t cut out.”

Finding coordinates on the geocaching website or using an app on a smart-phone, a person attempts to locate a cache,... read more