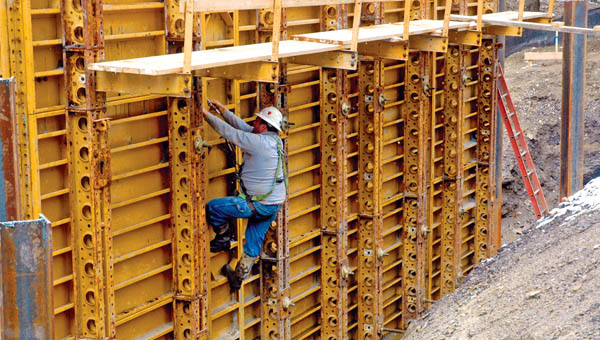 A worker for Bluegrass Contracting works on a support structure for the new Lake Vesuvius Bridge.

The Lake Vesuvius Bridge is approximately a third of the way completed, which puts the bridge on schedule to open sometime in June.

“The bridge should open in June, if construction stays on schedule,” Tim Slone, ranger at the Ironton District, said. “We have had a good winter to get work done; they have a good chance to meet the date depending on the weather between now and then.”

The new bridge will be in the footprint of the old one and then the temporary bridge will be removed, which is the final phase of the project, Slone said.

The temporary bridge was constructed down stream shortly after the original bridge collapsed.

The contract was awarded to Bluegrass Contracting Incorporation out of Lexington Ky., which presented a bid of $985,430. The Federal Highway Administration is funding the entire project.

In July 2010, massive rains washed out the structure at the lake’s entrance on County Road 29, off State Route 93.

The new bridge will have a new design. It will feature a single span structure of support, which is designed to keep debris from getting caught in the structure. The old bridge featured two spans.

The original bridge was constructed in the 1930s.