Lebanese college teams up with OU 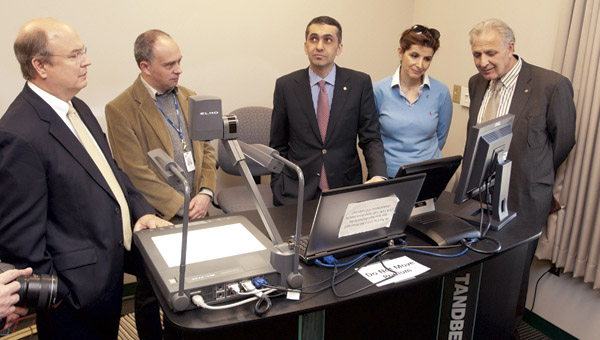 Don Moore and Mike Donley, both with the electronic media department at Ohio University Southern, go over the interactive video classroom with guests from Lebanese International University during a tour of the campus Wednesday. Pictured, from left to right, are Moore, Donley, Samir Abou Nassif, Zeinab Mourad and Ali Tarabay.

A handful of men and women from the Lebanese International University traveled thousands of miles to visit Ohio University on Thursday, all in an effort to gain a better understanding of the American higher education system and OU’s outreach system.

“All the technology being used as a way of enhancing the learning process should be commended. We are very impressed by it,” Dr. Ali Tarabay, vice president of academic affairs for LIU, said. “We are more impressed by the outreach that Ohio has, the state where it’s located and how it takes that learning mission to the regions where the need is.

“That is parallel to the very mission that we have back in Lebanon. Our university tries to take higher education to the community where the need is. That’s what compels LIU to establish grounds in Lebanon and beyond.”

Lebanon is located at the eastern end of the Mediterranean Sea, north of Israel and west of Syria. LIU is a private university, it was established in 2001. LIU is the biggest university in Lebanon; their language of teaching is English. LIU’s main campus is located in Beirut, which is the capital of Lebanon.

LIU officials had a better understanding of Ohio University’s goals after the visit concluded.

“This is a relationship that is going to continue.This isn’t just a visit,” Dr. Bill Willan, dean at Ohio University Southern campus, said. “It’s a chance for us to get to know each other better as people.”

The feeling seemed to be mutual.

“The people that we have dealt with over the years have become friends, aside from the professional relationship,” Tarabay, said.

LIU has become a transnational educator because it is the first university in Lebanon to go beyond the boarders, Tarabay said.

“We are found nation wide and beyond,” Tarabay said. “We have campuses in Yemen, Morocco, Senegal, plans are in place to go to Iraqi and Saudi Arabia.”

A group of LIU students will be attending Ohio University’s Athens campus for a semester, to study and learn about residency.

“LIU has over 26 partnerships all over the world,” Tarabay said. “The one that is endearing and really stands out is the one with Ohio.”

The goal for both universities is to diversify their students.

“The more that we can connect our students with students from other parts of the world, the better we will have done our job,” Willan said. “What we are trying to do is prepare students to go out and be successful in a world that is increasingly, through communication, becoming connected.”

LIU’s model is to take the American higher education standards and teach them in English, with an exception being in West Africa where English is non-existent.

LIU teaches English through the curriculum because it is the international business language, Nassif said.

LIU’s main campus teaches English, while the sister campuses offer the same curriculum but in French instead. LIU offers English as a second language. The school would like to offer students the chance to complete a degree program in English or in French, or a Hybrid of both languages.

Engineering has a two-year BSN and a three-year master program, which was adopted from America.

LIU could potential join with the Athens campus to create international education opportunities.

“We are very interested as well when we hear their (LIU) potential for joining Athens and the Global leadership program there to provide education, that is something we would like to be able to offer to students here as well. Maybe there is an opportunity in that regard,” Willan said.

I read with dismay articles in both the Ironton and Huntington papers concerning Ironton budget deliberations which make no mention... read more