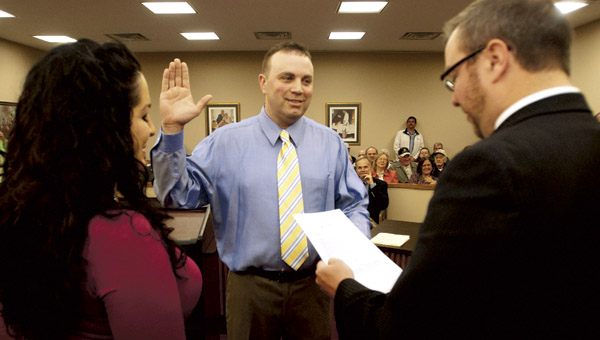 Fair board president Freddie Hayes is the county’s newest commissioner.

Hayes, also currently a member of the county board of elections, was chosen by the Republican Central Committee in a special meeting Thursday night.

Hayes will fill the seat of Commissioner Paul Herrell, who died in office in February, at least until the general election in November. Since Herrell was a Republican, that party had to fill the vacancy.

“I’m excited,” Hayes said when the winning tally was announced by Harriett Scragg, chairperson of the central committee.

“I appreciate your support,” Hayes told the committee after the vote. “I won’t let you down.”

Before the vote, both candidates spoke for three minutes campaigning for committee support.

“I have good name recognition in this county and I am ready to be your commissioner,” Lucas said. “I have experience in business and campaigning. … I am dedicated and determined. Dedicated to the principles of the Republican Party. I, with you, with us together, this fall we will be victorious for the Republican Party. I will serve you for all my days.”

Hayes told the committee that he has been involved with politics since he was 18 years old.

“This has been a lifelong dream,” he said. “There is not one person who will work any harder. It will take someone who will work really hard. And I am as honest as they come. I am a straight shooter.”

After the secret ballot vote, the committee voted by acclamation for Hayes also to be the party’s candidate in November.

Since Herrell’s term will not expire until 2014 and the vacancy happened more than 56 days before the next election, the Democrats can also put up a candidate.

“If there is more than one year left on the unexpired term, you have to elect the replacement,” Matt McClellan, spokesman for the Ohio Secretary of State’s office, said. “This is essentially a special election. Each political party has the ability to select a candidate to run for the unexpired term.”

The Democratic Central Committee expects to meet later this month to choose its candidate for the fall election.

Right now former commissioner Doug Malone has said he wants the job. Malone was going for his third term on commission when he lost to Herrell in 2010. Malone had gone onto the commission after beating Herrell in 2002.

Another possible candidate may be Ironton High School teacher Courtney Johnson, who said she is considering a run for the office.

With Hayes’ appointment, he must now resign from the elections and fair boards. The Republican Central Committee will choose the elections board replacement. The fair board will decide who will take Hayes’ place there.