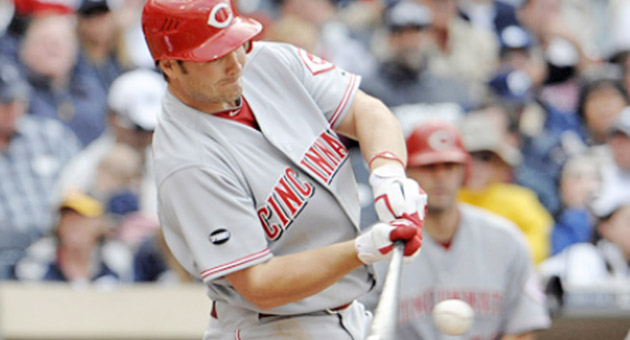 Cincinnati Reds’ outfield Chris Heisey had an RBI triple to help beat the Milwaukee Brewers 8-6 in a spring training game on Thursday. (The Ironton Tribune / Courtesy of the Cincinnati Reds)

Things may finally be returning to normal for Milwaukee.

Braun’s homer and Zack Greinke’s solid start were not enough for the Brewers, who lost 8-6 to the Cincinnati Reds on Thursday.

Chris Heisey hit an RBI triple and Juan Francisco had a solo home run in the Reds’ four-run fifth inning.

Weeks returned to the field for Milwaukee after spending the first few games as designated hitter due to shoulder soreness. Roenicke said he was happy with the way Weeks performed defensively.

“He looked good,” Roenicke said. “He had the one play where he came over, the throw was off, but he made a pretty good play getting to it. He’s doing a nice job running the bases. Just like Ryan’s home run, it’s nice to have a guy that walks in front of him.” and having a solo home run.”

Braun was 0 for 5 this spring before homering in the third.

“Leake was real good,” Cincinnati manager Dusty Baker said. “He left the change up up. That’s what spring training is for, to work on stuff, especially when you know you’ve made the team.”

With a number of youngsters and reserves in the lineup, the Reds had 14 hits, including two doubles, two triples and two home runs.

“Our young guys were swinging the bat good,” Baker said. “They were very aggressive. Yesterday we didn’t hit anything. That’s the way it is in spring training you’re hot one day and cold the next.”

The Brewers erased a 2-1 deficit in the fourth inning on Braun homer. Along with Braun and Gamel, prospect Caleb Gindl also homered for the Brewers, who dropped.

Making his second start of the spring, Greinke opened with four consecutive strikeouts. He finished the day having allowed two runs — one earned — on three hits with four strikeouts.

“I felt real good today,” Greinke said. “Lots of strikes; fastball had some life. The changeup was good, the slider was good. I’m really happy with how things went.”

NOTES: LHP Bill Bray tried to pitch a simulated game on Wednesday but had to shut it down. “The groin was biting him,” Baker said. “We think we have enough time to get him ready but we’ll have to make a decision soon. We always have Chapman. He is a great backup plan. We have six starters as it is.” … Reds closer Ryan Madson hasn’t pitched yet because of tenderness in his right elbow. “He said he’s had it before and the doctor told us its not serious,” Baker said.