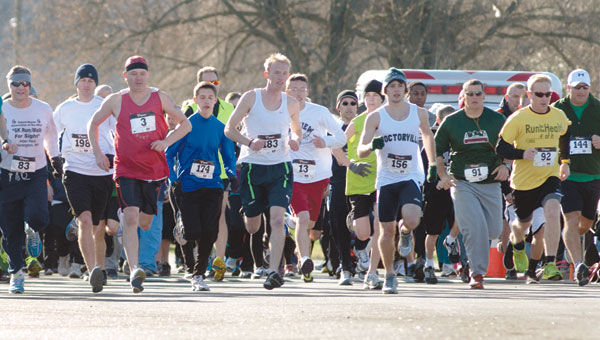 (ABOVE) Participants in the 2012 5K Race for Developmental Disabilities take off after the firing of the starting pistol Saturday morning at The Point industrial park in South Point. (BELOW) Seventeen-year-old Logan Rowe comes in first place in the event. There were 208 runners who turned out in 30-degree weather to show their support for the countywide DD program and get some exercise.

SOUTH POINT — The red beads on the digital time clock pulsed out the seconds as onlookers at this year’s 2012 5K Race for Developmental Disabilities kept watch on the road snaking into The Point industrial park.

Suddenly the sleek silhouette of Logan Rowe broke through the horizon as the Fairland High student loped into view Saturday morning.

“Here comes our first winner,” announcer Pat Riley told the crowd as Rowe crossed the line with the time of 17:41.

A half-hour earlier, Rowe, who started running in seventh grade, warmed up for the race by flipping his body into back bends with the ease of child twisting a pipe cleaner into a circle.

It’s the duality of exhilaration and contemplation that has always drawn Rowe to running.

“It’s a good escape and it feels good to be able to push your body,” he said. “And it gives you time to think while you run.”

This was the first time for the 5K run, part of March’s Developmental Disabilities Month roster of events, to be at The Point and the change of venue was a chance to offer a quieter place to run.

“We were going through Coal Grove before and here we have much less traffic,” said Tim Nunnery, public information officer for the Lawrence County board of DD. “And another thing, we like to think we serve all of Lawrence County. Next year we may move it to another location.”

There were 208 runners who turned out in 30-degree weather to show their support for the countywide DD program and get some exercise. The oldest runner for the day was 67-year-old Ron Hackworth of Huntington, W.Va., and the youngest was 4-year-old Briar Gregory, who came with siblings Zaylor Gregory, 6, Kasper Lewis, 1, and Clover Lewis, 5-months-old.

The two youngest came in a jogging stroller with their mother Brea Lewis, of Ironton, providing the push-power.

Another family affair was first-timer Karen Warner of South Point who came with her daughters, Bethany, Kara and Sara.

“I have been walking for my health and decided to do this,” said Warner, then looking at her daughter added, “She talked us into this.”

Janet Castle of Proctorville has run for five years pulling 25:03 as her best time so far in 5Ks.

“I gave up smoking and drinking and I started running,” she said.

Her best friend, Mollie Browning, has lived a more sedentary life, but was willing to give the event a go.

“We will do a run-walk,” Browning said. “I thought why not give it a try. It will be fun.”

Just before the starting pistol was fired at 9 a.m., Nunnery praised the runners and reminded everyone of the purpose for the race.

“Your participation here today speaks volumes about yourself, our community and our DD community.”