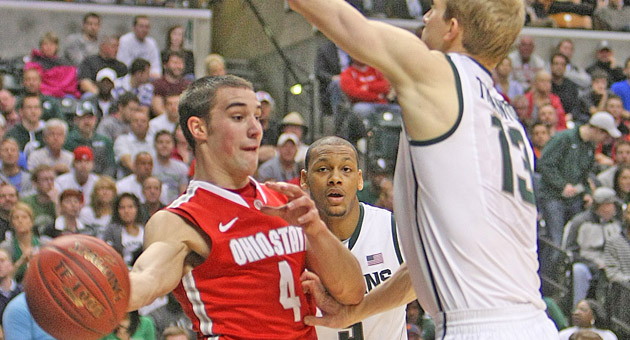 INDIANAPOLIS (AP) — Rarely does a game live up to the hype.

Michigan State and Ohio State made it happen.

Jared Sullinger scored 18 points, and Deshaun Thomas and William Buford added 11 each for Ohio State (27-7). The Buckeyes were denied a third straight title in a dramatic game that featured 16 lead changes.

The buildup was huge. Buford hit a game-winner with 1 second left to help the Buckeyes defeat the Spartans 72-70 on Michigan State’s home court in the regular-season finale to claim a share of the Big Ten title and prevent the Spartans from winning it outright.

Sunday’s rematch had a big-time feel, and it seemed even bigger after the lights were turned off for player introductions.

“Well, this game came down to, as we thought it would, making big plays,” Ohio State coach Thad Matta said. “Like last Sunday, we made the plays, we made the shots. Today they did. And it was a back-and-forth battle.”

Draymond Green, who had 12 points and nine rebounds in the final, was named the most outstanding player of the tournament. The Spartans (27-7) claimed their first tournament title since 2000.

“It was a tough game for me, but my guys picked me up,” Green said. “Everybody gives me the credit, but these guys came through huge two days in a row.”

Sullinger averaged 24 points and nine rebounds for the tournament.

He committed his second foul with 8:22 left in the first half. At that point, the Buckeyes led 18-17. Michigan State appeared to gain momentum late in the half. A putback by Green and a layup by Keith Appling late in the half gave the Spartans a 34-29 lead.

Aaron Craft scored on a putback, then Buford made a free throw after Michigan State coach Tom Izzo was issued a technical foul for disagreeing with a call, and the Spartans led 34-32 at halftime.

Sullinger immediately changed things for the Buckeyes, scoring nine points in the first 7 minutes of the second half. He made a jumper, Appling missed a layup on the other end and Thomas made a 3-pointer to put Ohio State ahead 52-45.

“I think that leading into this, Jared probably had his three best practices of the year,” Matta said. “I knew he was going to play well.”

Wood answered with two 3-pointers to put the Spartans back ahead, highlighting a 10-0 run.

“He was on it today, making shots, and that’s what he’s known for,” Matta said of Wood. “Happy for him that he has an opportunity to play in this game. And he was feeling it from behind the line there and hit some difficult shots. We didn’t get matched up quite as quickly as we needed to.”

Late in the shot clock, Green found Wood under the basket. He caught the ball in midair while under the basket, and his reverse layup gave the Spartans a 62-57 lead with 7:27 to play.

As good as Sullinger was throughout the tournament, his final minute was one to forget. He missed in close twice against Green, then missed the front end of a 1-and-1 with 25 seconds remaining.

Austin Thornton’s free throw with 12.7 seconds left put the Spartans up 68-64 and started the celebration for Michigan State’s fans.

“Coach always talked to us about leaving a footprint in the sand. He always said Mateen Cleaves, he left a footprint, Magic Johnson — they left a footprint. And me and Austin (Thornton) always say, when we leave here, we want him to talk about the Green-Thornton era. We’ve been talking about our footprint.”

GOODYEAR, Ariz. (AP) — Jay Bruce hopes a weight loss will help him get through a long season. The Cincinnati... read more