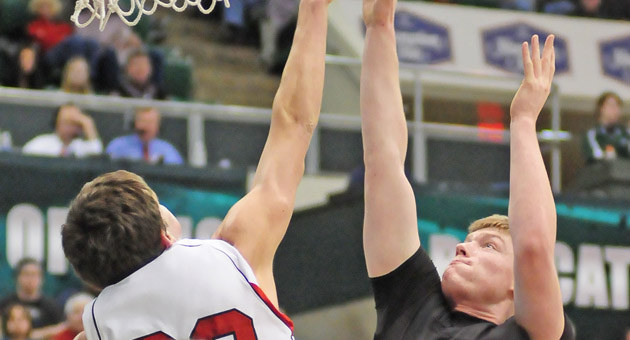 Ironton Fighting Tigers’ Aaron Stephens (45) gets a put-back basket in a 66-61 overtime win over Eastern Brown on Saturday in the Division III district championship game. Ironton plays Coshocton at 6:15 p.m. on Wednesday while Chesapeake faces Portsmouth at 8 p.m. in the regional semifinals. Both games are at the Ohio University Convocation Center. (The Ironton Tribune / Kent Sanborn of Southern Ohio Sports Photos)

Of the Division III regional qualifiers, the Ironton Fighting Tigers and Chesapeake Panthers are making their 13th trips while the Portsmouth Trojans are making a Southeast District record 36th appearance.

However, Coshocton has reached the regional tournament for the first time since 1983. They ended their 29-year draught by beating Sugarcreek Garaway 46-26 in the district finals.

The two winners will meet at 7:30 p.m. on Saturday for the right to advance to the state tournament to face the winner of the Bowling Green regional.

Coshocton is led by 6-foot-5 Brandon Taylor— a Newberry College recruit who was the East District Player of the Year. Taylor averaged 21.9 points, 7.0 rebounds and 3.6 assists on the season.

His running mate is 6-4 senior Drew Jarvis who averages 15 points an outing.

“We know they have some size, they’re physical and they play good defense,” said Ironton coach Mark LaFon. “When you go deeper and deeper into the tournament, the competition always gets tougher. We expect a tough game.”

The Redskins’ defense has been tough during the tournament. They have held teams to under 40 points in all three games.

The second game pits two ranked teams as No. 4 Chesapeake and No. 6 Portsmouth are expected to wage a monumental battle.

The other two starters are 6-2 senior center Brandon Noble and 6-1junior guard Javon Thompson. The top player off the bench is 6-3 sophomore Chad Meadows.

Portsmouth relies on a deep bench and rotates starters that include Mason Jordan, Seth Bratchell, Dayllen Carter and Len Collins.