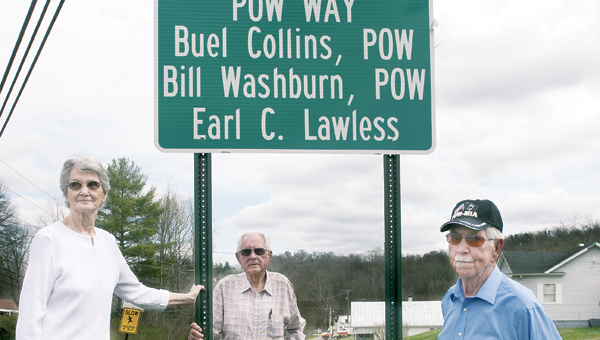 Just off one of the busiest sections of State Route 93 is a meandering road that now offers two reminders of the courage and sense of duty of those from Lawrence County who served their country.

One is the weather-beaten granite-shaded stone that names those from Storms Creek Baptist Church who served in World War II.

And across Coryville Road is the latest one — a green and white sign that marks that road as the POW Way honoring Buel Collins, Bill Washburn and the late Earl Lawless.

Washburn and Collins were both POWs in WWII and Lawless served in the Korean Conflict.

On Friday afternoon the county commissioners dedicated the new sign in a ceremony with Washburn, Collins and the family of Lawless present.

“Not everyday in a person’s life do they get to meet true American heroes,” Commission President Les Boggs told those assembled. “Let alone to meet the families of three in one day. This is for what they meant and what they endured.”

Collins spent six months in a German prison camp following his capture in the Battle of the Bulge.

“I think this is nice to be recognized,” Collins said before the ceremony.

Washburn, whose plane was shot down, spent the last three months of the war in a prison camp. All three men have ties to the Coryville area.

“Sacrifices are given without expectations,” Boggs said. “Every now and then you get the recognition you deserve. Those who honor our country are a worth a lot more than putting up a sign. But sometimes it is good to say we haven’t forgotten.”

Even though the name of that portion of the County Road 7 has been changed, those living on that road will keep their same street address.

Court of appeals to convene in Lawrence County IRONTON — The Fourth District Court of Appeals will convene on Thursday,... read more