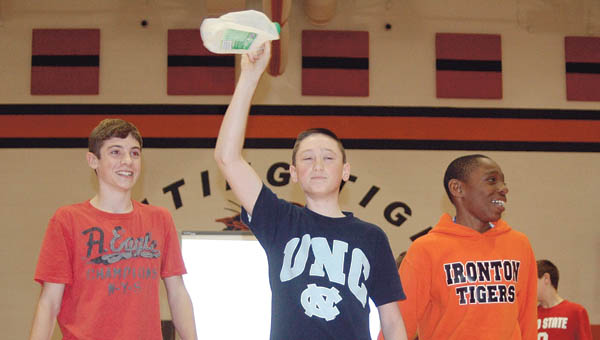 Jacob Isaac, Trevin Dutey and Andrew Scott lead Ironton Middle School students Friday in a cheer for the milk jugs. Milk jugs can be recycled, which was the point of a visit by Rumpke, Inc. presenter Jonathan Kissell. The Lawrence-Scioto Solid Waste Management District has new recycling containers at the back of the school. The containers are open to the public.

The pile of empty containers on the table may have just looked like a pile of garbage to the students who walked into the Ironton Elementary/Middle School gymnasium Friday. But when they left, Rumpke, Inc., presenter Jonathan Kissell hoped they viewed soft drink cans and milk bottles and laundry detergent jugs with new respect.

Kissell was in Ironton Friday to promote recycling. The school now has a Lawrence-Scioto Solid Waste Management District recycling container on the back of its lot and Kissell hopes the students and their families will start recycling at home, if they don’t already.

Kissell told the students the landfills operated by his company took in more than 8 billions pounds of waste in 2010. That amount, he explained, is equal to 337,000 school buses.

“That’s enough (buses) to go from the middle school to Miami, Fla., and back with buses left over,” Kissell said. And then he pointed out that, “More than half of the waste we put in landfills can be recycled.”

Recycled plastic can be made into drain pipe; used paper can be recycled into new paper.

Recycling bins are at Lawrence County Municipal Court on County Road 1 in Chesapeake, the Perry Township Fire Department on County Road 1 in Sheridan, at Food Fair on State Route 7 in Proctorville, at Food Fair on Solida Road in South Point, at Sam’s Club in Burlington, at both stations of the Rome Township Volunteer Fire Department on State Route 7, at the Coal Grove Village Hall on Carlton Davidson Lane and at the U.S. Forestry Service office on State Route 93 in Elizabeth Township as well as the Ironton school site.

Get out the gizmos you no longer use or need. The Lawrence – Scioto Solid Waste Management District is having... read more