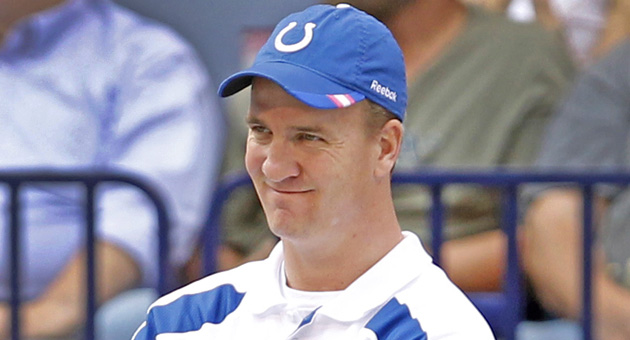 DENVER (AP) — The Denver Broncos got their Man. Make that Peyton Manning.

Still to be decided is what happens to last season’s quarterback sensation, Tim Tebow.

The Broncos and Manning agent Tom Condon spent Monday working out parameters of a deal expected to be worth about $95 million over five years after the NFL’s only four-time MVP called Elway, the Broncos’ revered QB-turned-executive, and told him he had decided to come to Denver.

Tennessee Titans owner Bud Adams also said Manning let him know that he had picked the Broncos. Adams released a statement Monday confirming the Titans were out of the running and later said to The Tennessean: “He called me himself and told me he wasn’t coming, that he made his mind up to go with Denver.”

Besides the Titans, the San Francisco 49ers had been a finalist in the chase for Manning, who turns 36 on Saturday and missed all of 2011 because of multiple neck surgeries.

ESPN first reported the record-setting quarterback instructed his agent to negotiate the details of a deal with the Broncos, less than two weeks after the Indianapolis Colts released him rather than pay a $28 million bonus.

Despite being sidelined all of last season, Manning’s success in the past — the Colts averaged a 12-4 record from 2001-10 — made him by far this offseason’s top potential signing and perhaps the most desired free agent ever.

He was wooed to Denver by Hall of Fame quarterback Elway, who led the Broncos to two Super Bowl championships and now serves as their vice president of football operations.

Elway, who retired from the game after winning his second straight title in 1999, never sounded all that convinced Tebow was the answer at the sport’s most important position and now could trade the enormously popular but flawed QB.

Tebow energized the Broncos in leading them to the playoffs last season — and has fans all over the country — but his play was erratic.

“I wouldn’t say I feel bad for him,” Ayers said. “It’s a business. And I’m pretty sure Tim understands that. … We wish him luck, no matter what he does. I hope he’s here. He’s a great leader, a great locker room guy.”

Manning was cut loose March 7 by the Colts. The move marked the end of an era, a 14-year alliance between the team that drafted Manning No. 1 overall and the QB who brought Indianapolis from football irrelevance to the 2007 Super Bowl title and a second appearance in the NFL championship game three years later.

But with Manning’s rehab continuing, the Colts decided it was time to rebuild from top to bottom, and they are expected to take Stanford quarterback Andrew Luck with the top pick in April’s draft.

Two days after standing alongside Colts owner Jim Irsay at an emotional farewell news conference, Manning began his free agency tour in the place it was ending: Denver. Manning landed on Tebow’s turf with all the trappings of star treatment — flown to town on a chartered plane, then spending the day with Elway, coach John Fox and general manager Brian Xanders.

From there, Manning crisscrossed the country in search of a new team, as various clubs courted a guy with more than 50,000 yards passing, nearly 400 touchdowns and 11 Pro Bowl selections. After Denver, next up was a meeting with the Arizona Cardinals, and he also spent time speaking with — or throwing for — the Titans, 49ers and Miami Dolphins, with TV cameras and even helicopters often on the trail.

In the end, though, Manning decided he wanted to trade in his Colts horseshoe helmet for one adorned by a Bronco. The move would allow him to stay in the AFC, a conference he knows well and one considered weaker than the NFC at the moment, and would re-establish the tantalizing prospect of playing against his brother, New York Giants quarterback Eli, in a Super Bowl. They already have three titles in the family.

Manning-to-Denver also creates a fascinating dynamic with Tebow, only months after the former Heisman Trophy winner was the focus of the NFL regular season and perhaps the most talked-about athlete in sports, a polarizing figure both because of his style of play — as far as possible from a classic, dropback passer — and his outspoken religious beliefs.

After taking over a struggling team, Tebow led the Broncos to comeback victory after comeback victory, struggling for three quarters before starring in the fourth quarter and overtime. With an offense transformed into a spread option attack built on Tebow’s running, and a strong defense that kept games close, the Broncos won the AFC West title.

Tebowmania reached its apex in the playoffs, when he threw an 80-yard touchdown pass to Demaryius Thomas on the very first play of overtime to beat the Pittsburgh Steelers. The next week, though, Tebow was smothered by the New England Patriots, who easily eliminated the Broncos 45-10.

A little more than two months later, Tebow could be on the trading block.

“He’s a young man, right? And a year or two of working under John Elway and Peyton Manning, you know, I’m not sure any other quarterbacks around the country get that opportunity,” Hickenlooper said.

Tebow isn’t the only domino that could fall now that the offseason’s biggest free agency question is seemingly settled.

San Francisco could decide to keep its own free-agent QB, Alex Smith, who went to Miami for a visit with the Dolphins after the 49ers’ flirtation with Manning became public. If Smith does go back to the Niners, perhaps Miami will look to trade for Tebow, who played in college at Florida. The Titans, meanwhile, probably will stick with grooming Jake Locker, who was a first-round draft pick a year ago.

Denver, meanwhile, could try to give Manning some new targets, because they still have millions of dollars in salary-cap space available. The Broncos did not exactly have a wealth of wideouts last season, other than Thomas, and they lost Eddie Royal to the San Diego Chargers as a free agent.

Eric Decker struggled to catch Tebow’s erratic passes, and was plagued with drops, but would seem a perfect fit for Manning’s precise passing game.

Ayers said he hoped the Broncos would be able to persuade other free agents to join the Broncos, such as Manning’s former Colts teammates Jeff Saturday and Dallas Clark.

Running back Willis McGahee tweeted: “To all my free agents across the nfl, I think u know what time it is.”

Former teammates of Elway’s were just as excited, with Hall of Famer Shannon Sharpe tweeting: “I think (at)Terrell—Davis and I should round up the old gang and make a comeback.”

Reach out to AP Pro Football Writer Arnie Stapleton on Facebook and http://twitter.com/arniestapleton

By JIM WALKER Tribune Sports Editor   Evan Salyers has quite a resume. On Monday, he added another item. The... read more