Bearcats-Buckeyes game a rarity despite proximity 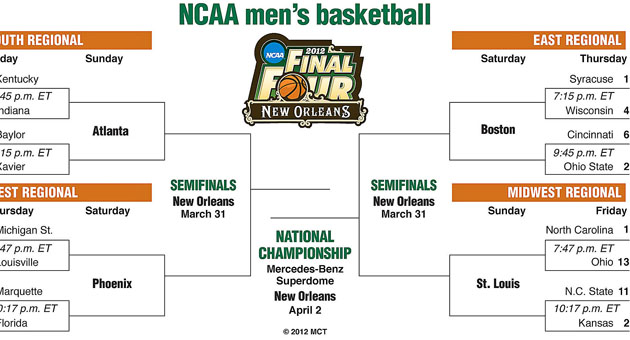 COLUMBUS — It appears that if the NCAA isn’t the matchmaker, Cincinnati and Ohio State will never get together in basketball.

When the two old adversaries — who’ve met just one time since the 1962 national championship game — meet in Thursday night’s East Regional semifinal in Boston, it’ll have to be enough to mollify fans longing for a regular-season meeting.

Buckeyes coach Thad Matta concedes there are too many old grudges and roadblocks to the teams ever agreeing to get together annually.

“We’re going to play ‘em Thursday night,” Matta cracked. “What else do you want?”

Over the years, fans of both schools — just a couple hours apart on Interstate 71 — have hoped and prayed for the teams to battle each year like other in-state rivals such as Louisville-Kentucky and Iowa-Iowa State. But there’s a wealth of bad blood separating them.

There have been allegations — on each side — of recruiting violations. Also, when Bob Huggins was UC’s coach, he felt slighted when Ohio State — where he was an assistant — wouldn’t even talk to him when it had a job opening in the 1990s. Then-Ohio State AD Andy Geiger vowed that he would not even consider renewing the rivalry. On top of all that, Ohio State stubbornly refuses to leave its campus to play another school from within the state’s borders, while Cincinnati insists on the Buckeyes coming to their home court.

The schools’ football teams have met four times in the last dozen years, with all of the games but one — the Bearcats almost ruined Ohio State’s national championship season in 2002 before falling 23-19 at neutral site Paul Brown Stadium in Cincinnati — played at the Buckeyes’ Ohio Stadium.

But the basketball teams remain separated by a scheduling civil war. Their only meeting in the last 50 years was the Buckeyes’ lopsided 72-50 victory in the 2006 Wooden Tradition in Indianapolis.

Cincinnati coach Mick Cronin declines to talk about why the Bearcats and Buckeyes never meet.

“You’re asking the wrong guy,” he said. “I think that’s a fairly well documented story. I really don’t have any interest in it. As you can see, I’m losing my voice. I’m trying to save it for stuff that matters.”

It’s more than just an unbending will between the two schools, of course. Each has a huge fan base, neither of which is particularly fond of the other school or its followers.

The Bearcats’ fans consider the Buckeyes as overrated bullies who are obsessed with their favorite team and who look down on anybody else. Ohio State’s followers look at the Bearcats players as a bunch of thugs (they were involved in a big fight against another NCAA regional semifinalist, Xavier, earlier in the season). And they don’t even consider the Bearcats to be from the same state — more like a renegade institution from across the Ohio River in Kentucky.

But the players and coaches do have respect for the other side.

“They are playing great basketball right now,” Matta said of the Bearcats. “Looking back at film, the wins they’ve been able to put up, they’ve really found their rhythm in terms of how they’re playing. The guards are multi-dimensional and Yancy (Gates) inside is really a load.”

Cronin, who has spent most of his coaching career in Cincinnati, heaped praise on the Buckeyes.

“You try to think about how you’re going to stop them, it’s head scratching,” he said of the lineup built around All-American forward Jared Sullinger. “You’re going to have to pick your poison in some places. They’re that good on offense.”

It’s a risk to call the schools rivals, since they so seldom cross paths. Neither is hotly pursuing any future meetings, either.

Matta was asked if the two sides might somehow meet in the middle.

Mentioning a commercial location midway between the Queen City and Capital City, Matta said, “You mean like at Jeffersonville at the outlet mall?”

After the laughter died down, he added, “I doubt it. It’s probably highly unlikely.”

By JIM WALKER Tribune Sports Editor   It turns out that “8” was enough. Eight area players were named to... read more