Ground broken for building at The Point 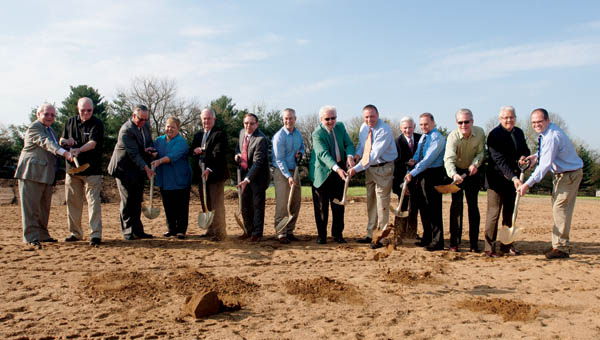 Community leaders, members of the Lawrence Economic Development Corporation and Mullins Construction participate in a groundbreaking ceremony Tuesday for a new spec building at The Point industrial park.

SOUTH POINT — By fall there should be an eighth spec building ready for occupancy at The Point industrial park.

On Tuesday morning economic development leaders broke ground for the 30,000-square-foot structure designed for an industrial tenant. It will feature a 10-ton crane with a 25-foot hook height.

“That’s the universal standard,” Jeremy Clay, director of the industrial park, said. “It will have finished flooring and offices. We don’t have a tenant. Word of mouth has been successful so far. If not, we will start a massive marketing campaign.”

So far the companies that have located at The Point since the Lawrence Economic Development Corp. created the industrial park have brought in more than 250 jobs, Clay said.

John Mullins Construction from Scioto County got the low bid for the just-under $1 million job. This will be the fourth building at The Point that Mullins has built.

“This is tremendous,” Mullins said about development at the industrial park. “I wish more communities had the leadership that they have here.”

At the ceremony attended by the county commissioners, the LEDC leadership and area businessmen, Dan Mooney, LEDC president, praised the organization’s work.

“The Point is by far the LEDC’s shining star,” Mooney said. “Job creation is what we are all about.”

“It is a team united to keep the projects done for the good,” Dingus said. “And with the intermodal facility we will be the doorway to the world.”

If salary spending continues at its current pace, the county government could be in the hole to the tune of... read more