Battle of Ohio to OSU: Buckeyes rally by Bearcats to reach Elite Eight 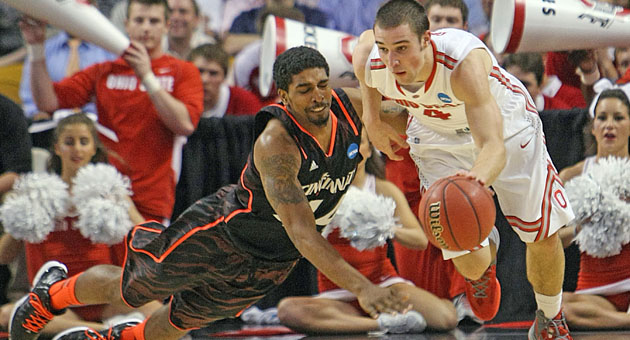 Ohio State’s Aaron Craft (4) takes the ball from Cincinnati’s Jaquon Parker during the first half of their NCAA Tournament East Region game at the TD Banknorth Garden in Boston, MA., on Thursday. The Buckeyes pulled away in the second half to beat the Bearcats 81-66 to reach the Elite Eight. (The Ironton Tribune / MCT Direct Photos)

BOSTON (AP) — Jared Sullinger and the Ohio State Buckeyes had blown a 12-point lead and fallen behind Cincinnati in the second half of the East Regional semifinals.

It was time for the “cool guys” to take a seat, and let the blue-collar team take over.

Sullinger scored 23 points with 11 rebounds and Ohio State turned back Cincinnati’s last charge with a 17-1 run to beat the Bearcats 81-66 on Thursday night and advance to the NCAA regional finals for the first time since 2007.

“We’ve got two types of basketball teams: We’ve got the cool guys and then the blue-collar guys,” Sullinger explained. “I thought to start the second half we got into the cool-guy mode and we kind of let our guard down. … I mean, we just came out and decided to be cool guys, and they came out and they stung us, and then we got ourselves back into another basketball game.”

Deshaun Thomas scored 26 points for the second-seeded Buckeyes (30-7), who will play Syracuse at the TD Garden on Saturday. Aaron Craft added 11 points — all in the second half — with five assists and six steals, taking charge during the second-half run that turned a four-point deficit into a double-digit lead.

Cashmere Wright scored 18 and Sean Kilpatrick had 15 for the No. 6 seeded Bearcats, who were attempting to match Big East rival Syracuse by beating a Big Ten opponent to advance to the East Regional finals. The top-seeded Orange advanced earlier Thursday by beating fourth-seeded Wisconsin 64-63.

It’s the first trip to the regional finals for Ohio State since it lost in the 2007 championship game to Florida. The Buckeyes lost in the round of 16 in each of the past two years.

“Coach (Thad) Matta has been through two Sweet 16s where the train kind of stopped. And we wanted to make sure that this train was going to keep rolling,” Sullinger said. “It’s tremendous to be in a situation like this, and it’s a blessing. But at the same time we can’t lose focus.”

Wearing Day-Glo orange shoelaces and piping on their jerseys, Cincinnati (26-11) fell behind by 12 at the half before going on a 19-4 run early in the second. The Bearcats led 52-48 with 11:34 to play when Matta called a timeout and ripped into his team.

The Buckeyes allowed just one free throw over the next 5 1/2 minutes.

“They had 20 points in nine minutes and were shooting 80 percent, and some of that goes to them,” Craft said. “But we didn’t play defense like we did in the first half. We did a great job of sticking together and getting stops.”

That effectively ended the season for Cincinnati, which fought its way back into prominence after a Dec. 10 brawl with crosstown rival Xavier.

The Musketeers, who were unbeaten and No. 8 in the nation at the time, lost their top three scorers and then five of their next six games. But Cincinnati, which fell to 5-3 with the 23-point loss at Xavier, won 10 of its next 11 games despite using a four-guard offense made necessary by the six-game suspensions of Yancy Gates and center Cheikh Mbodj.

The Bearcats reached the final of the Big East tournament and beat Texas and Florida State in the NCAAs to reach the regional semifinals for the first time since 2001.

“We’ve come a long way. I take a lot of pride in that. Nothing’s been given to us,” Cincinnati coach Mick Cronin said. “In the Big East, rebuilding a program has been a tough chore the last 10 years.”

Ohio State, which lost to Michigan State in the Big Ten championship game, reached the round of 16 by beating 15th-seeded Loyola of Maryland and No. 7 seed Gonzaga. The Buckeyes were among four Ohio teams in the round of 16. Ohio plays North Carolina and Xavier plays Baylor on Friday.

Despite just about 100 miles separating their campuses along I-71, Ohio State and Cincinnati had played just once since the 1962 national championship game.

This one was evenly matched — for about 30 minutes.

The Buckeyes led Cincinnati by five when Thomas hit back-to-back 3-pointers and Ohio State scored 10 of the last 13 points in the half to open a 37-25 lead. But Cincinnati opened the second half with a run of its own, tying it 41-all on JaQuon Parker’s baby hook shot in the lane.

“In the last 10 minutes, we challenged them. It was time,” Matta said. “It’s obviously a very, very good feeling to be down to eight tomorrow night, whenever the games end, with a lot at stake. I mean, so much is put on now, the NCAA tournament. I couldn’t be happier for this team.”

PHOENIX (AP) — Louisville figured its game against Michigan State to be low-scoring, a natural expectation with two of the... read more