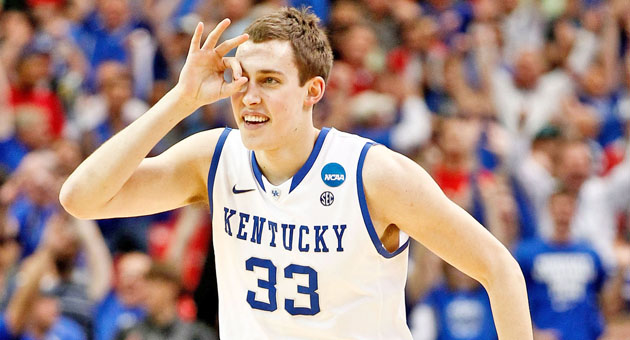 Kentucky Wildcats forward Kyle Wiltjer (33) saluted after hitting a three pointer against the Baylor Bears during the men’s NCAA basketball tournament at the Georgia Dome in Atlanta, Ga., on Sunday. (The Ironton Tribune / MCT Direct Photos)

ST. LOUIS (AP) — Tyshawn Taylor broke out of his slump in a big way, scoring 22 points and leading Kansas back to the Final Four with an 80-67 victory over former coach Roy Williams and top-seeded North Carolina on Sunday.

The second-seeded Jayhawks (31-6) will play Ohio State on Saturday in their first Final Four appearance since winning the 2008 national championship.

Taylor led five Jayhawks in double figures. Player of the year candidate Thomas Robinson added 18 points and nine rebounds, and Elijah Johnson kept up his blistering pace in the NCAA tournament with 10 points, including a 3-pointer with 3:07 to play that sparked Kansas’ 12-0 run to end the game.

Jeff Withey made two monster blocks to deny the Tar Heels during the run — including one that set up a big three-point play by Taylor.

ATLANTA (AP) — Top-seeded Kentucky cruised into the Final Four for the second year in a row, blitzing Baylor with a dominating first half in the South Regional final.

Anthony Davis had 18 points and 11 rebounds, while Terrence Jones was all over the place with nine rebounds, six assists, three blocks and two steals — most of it in the first 10 minutes.

Kentucky will face state rival Louisville in the NCAA semifinals at New Orleans on Saturday. The Wildcats will be seeking their first national title since 1998.

Quincy Acy led Baylor with 22 points. The Bears were eliminated in the regional final for the second time in three years.

The Associated Press   One game is a grudge match between teams that know each other all too well. The... read more