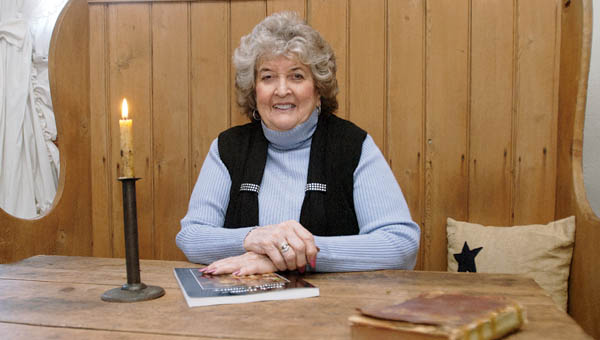 The white, Victorian-style, two-story house on Fifth and Mulberry streets in Ironton appears to be a typical home. But looks can be deceiving.

Inside this house is like an episode of “Little House on the Prairie.” With the exception of the TV, the entire design comes from the 16th, 17th or 18th centuries. The are no lights in the entire house. The only source of illumination comes from burning candles.

Carolyn Carter has spent a decade making her home unique and it is now garnering national recognition.

Carter’s home is featured in a book titled “Back Home.” Her house is displayed in chapter seven of the book, which spans 18 pages and features 45 pictures. Carter’s home was the only one in Ohio showcased.

Approximately 95 percent of the inside of the home is made of wood, either antiques or replicas. The furniture was constructed to resemble past centuries.

The interior resembles a log cabin. Everything from the wooden refrigerator to the wooden blinds hanging in the windows.

“To be qualified for the book, someone must submit your name,” Carter said. “They still won’t tell me who submitted my name.”

The publication contacted Carter in August 2010. They wanted to send a photographer to Carter’s house to take pictures before they could make the final decision. Judy Condon owns the publication and is one of the editors. She makes the final call.

“Judy saw the bathroom and it sold her on my house,” Carter said. “The inside has a log cabin effect.”

Condon, who lives in Massachusetts, created a four-book series called “Simply Country.” “Back Home” is the first book of the series.

In October 2010, Carter found out her home would be in the book.

“I was very honored that I was going to be in her book,” Carter said. “They took 300 pictures of the inside and 54 of the outside. Judy interviewed me twice for the book. Both interviews lasted three and a half hours.”

Carter purchased the house in 1995. She started the remodeling effort in 2004. She did the majority of the work by herself, only hiring laborers to complete major renovations.

Carter received her copy of the book in January 2012.

“I was elated for myself and my hometown because Ironton is named in the book,” Carter said.

Carter recognizes how special her accomplishment was.

“I feel very honored that she selected my home out of all the other homes that she looked at,” Carter said. “She looked at 50-60 homes and mine was the only one selected in Ohio. In 2010, three other magazines contacted me about publishing my house, I went with one of them but they had to wait two years before they could publish it because I had a verbal agreement with Judy. I also had another book contact me but I’m not going that route anymore.”

Carter made a two-year verbal agreement with Condon when she was selected. No publication is allowed to print pictures of Carter’s house until July 5.

COAL GROVE — For the past several years, the VFW Post 8850 Ladies Auxiliary has hosted an Easter egg hunt... read more