Amvets 5293 Commander Miles Lewis has been selected to be the honorary grand marshal for the 2012 edition of the Ironton-Lawrence County Memorial Day Parade.

The parade committee chose Lewis at a meeting earlier this month. 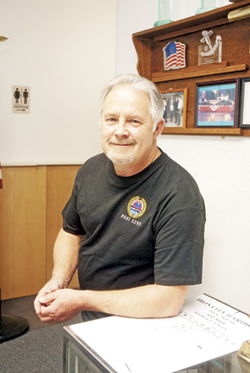 Miles Lewis, commander of the Amvets 5293, is this year’s honorary grand marshal for the Ironton-Lawrence County Memorial Day Parade.

Lewis is a U.S. Army veteran who served his country two years, more than of a year of that in Vietnam.

Lewis said he was honored to be chosen honorary grand marshal.

“It was kind of surprising,” Lewis said. “I wasn’t really expecting it.”

Lewis joined the Ironton Amvets chapter in 2004 and has been commander three years. In 2011, he was named All-State Commander for the Ohio Amvets. In 2007, Amvets 5293 was selected from among more than 1,300 posts for a community service award.

“That’s where our hearts are, for the vets,” Lewis said.

Parade committee member Lou Pyles said plans for the parade are moving toward finalization, with a little more than two months to go before the annual procession.

“We have some new people in the parade, she said. “The U.S. Army Corps of Engineers from Yatesville Lake (in Lawrence County, Ky.,) have said they will attend. We have Charlie’s Harley Davidson taking part this year. I’m really thrilled they want to participate.”