Posthumous honor given to family of Lawrence County veteran 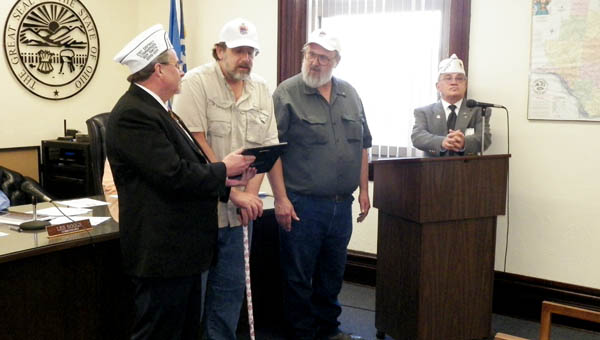 Amvets state officials present an award to the sons of the late Kenneth Kingrey for his service to his country.

In honor of his service as a veteran and for veterans, the late Kenneth Kingrey was honored by the AmVets District 21 of Ohio March 19 at a ceremony at the Lawrence County Courthouse.

Kingrey, a local WWII veteran, died Nov. 6, 2011. He served in the United States Army/Air Force during WWII, coming home from active duty in May 1946.  During his service, he received the Asiatic-Pacific Theater Ribbon with one Bronze Star, the American Theater Ribbon, Good Conduct Medal, and the Victory Medal of WWII.

Kingrey became a Lawrence County Veterans Service Commission board member in January 1999, serving continuously through 2010.  As well as being involved with AmVets, he was also involved in positions of leadership with other veterans organizations including the Veterans of Foreign Wars and the American Legion in the service of other veterans until his death.

Since his death, his sons have stepped up to the leadership role of the AmVets Willow Wood Post 141 to keep the post intact and carry on his service to veterans.  Also his daughters are keeping the family business going.

ASHLAND, Ky. — Are your children adequately protected in your car or truck? According to the National Highway Traffic Safety... read more