Better than an apple 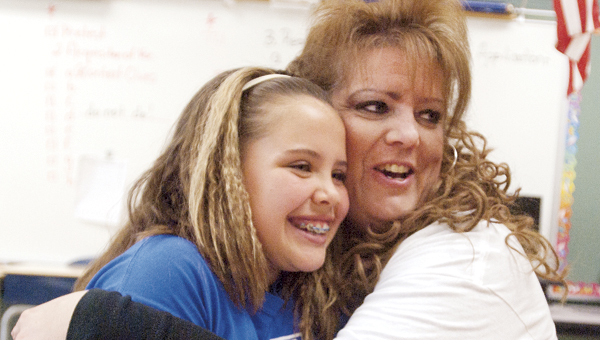 In a letter to the editor Dawson-Bryant Elementary School student Mattie Malone talks about her special relationship with teacher Ronda Hall.

COAL GROVE — Spring is in the air, and before you know it, children will celebrate the start of summer vacation.

But there is at least one student who just isn’t looking forward to a break from school: Dawson-Bryant fifth-grader Mattie Malone.

Mattie admitted the thought of not wanting the school year to end may sound strange, but her reasoning is simple and heartfelt.

“Last year I didn’t like coming to school at all” Mattie said. “I got bullied. I never liked school and I was never looking forward to it. I get to fifth grade, and I love it.”

What changed in a year?

Mattie will tell you it was her inspiring reading and drama teacher, Ronda Hall.

“She inspires people,” Mattie said. “She makes people want to be her. She encourages people to be who they are. She just makes everyone happy. It’s like you’re looking at sunshine everyday.”

To show her appreciation and admiration, Mattie surprised Hall with a presentation at Monday night’s fifth-grade musical production of “The Rockin’ Tale of Snow White.”

Mattie had written a letter about Hall, which she read in front of the audience. She also gave Hall a framed copy of the letter.

“She does so many nice things for me, I figured I should do something nice for her,” Mattie said. “She lifts me up no matter how I feel and I just wanted to make her feel the same way.”

Hall said he had no idea Mattie had planned the presentation, which brought them both to tears.

“It’s almost like this magical thing because I think I get so much more back from (my students),” Hall said. “When (Mattie) says she wants to lift me (up), she has no idea. I have bad days too and (teachers) have hard days too. I’m just doing my job.”

Hall, in her 20th year of teaching, said she tried to instill in her students the confidence to be themselves. Standing more than 6 feet tall, Hall said she had her share of bullies when she was in school.

“You want a teacher like that, that way you’re able to go talk to them,” Mattie said of Hall. “If you have problems at school, you have someone like a friend to go talk to.”

Mattie even said in her letter Hall was like a second mother to her.

In the fall, Mattie will be a sixth-grader in the middle school. Hall said sometimes she wished she could follow her students on and keep teaching them.