Tennis standout hopes to play at the next level 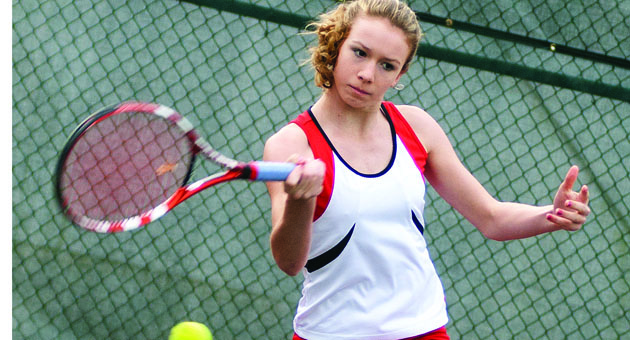 SOUTH POINT — Game, set, match. These tennis terms mean a lot to 14-year-old Madison Riley now and may mean even more to her future. Madison Riley hopes those words equate to a prosperous career.

Madison dreams of playing on the Women’s Tennis Association pro tour after college. Madison recently won two singles divisions in the Charleston Jr. Open in West Virginia. Madison is ranked fourth in the state of Ohio among eighth grade girls.

“What attracts me to tennis more than any other sport is the intensity of it and how it is just a one person sport,” Riley said. “You can just rely on yourself to do the best that you can do.”

At 5-foot-6 and 115 pounds, the slim girl with blondish-brown hair runs to stay fit and help ensure that her best is better than her opponents.

The South Point native, Madison has played in 88 tournaments. She has won 151 matches and has 38 trophies. She has played tournaments in Ohio, Kentucky, West Virginia, Michigan, Virginia, South Carolina, Georgia and Florida.

“My most memorable experience is when I played a tournament at Myrtle Beach and I won that tournament,” Riley said. “I was the youngest one in my age division.”

Riley started taking lessons at the Ashland Tennis Center when she was 8 years old. At the age of 9, she started competing in United States Tennis Association events.

“I just really enjoy playing it and I have more fun with tennis than any other sport,” Riley said.

Riley has taken lessons from different people over the years but one person is continuing to make the biggest impression on her life and goals.

“Her Dad (Eric) is her tennis pro,” Kimberly Riley, Madison’s mother, said. “He spends countless hours working with her. They spend at least two hours a day, late in the evening, working and fine tuning what she needs to do.”

Even though tennis is Riley’s main passion, she is an all around gifted athlete. She is on the South Point Middle School golf and basketball team. Her basketball team lost in the Ohio Valley Conference finals this year.

“I love basketball., I have been playing since I was in the fourth grade,” Riley said. “I like basketball because it’s a fast paced game and you are always on your feet.”

But Riley’s passion extends beyond sports and faith is important to her. She leads a Bible study called the Son Rise Club. She volunteered to lead the group last year.

“I believe that God’s will for my life is the best and I try to model my life after him and what he tells me to do in his word,” Riley said.

She is also active in her youth group at Grace Gospel Church in Huntington, W.Va.

“God is my lord and savior and he has been since I was 5 years old,” Riley said.

Like any 14-year-old, school provides an ample opportunity for social engagements.

“Another reason I like school is it gives me time to kind of relax and socialize with my friends,” Riley said. “With tennis, there are not a lot of kids my age that play and so I’m normally always talking to adults and not people my age. And in school, I have friends and we just talk and laugh and just have fun.”

Whether Riley plays on the pro tour or attends medical school after college, she believes that everyone just needs to set lofty goals.

“If you dream big, and if you work hard at it, you can achieve it,” Riley said.

BURLINGTON— The Lawrence County Sheriff’s Office is looking for a man who, posing as a police officer, allegedly groped a... read more