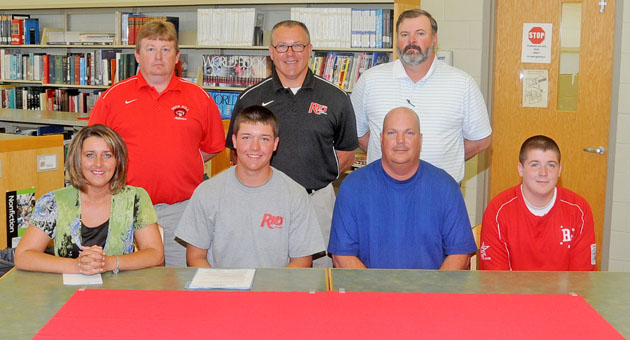 PEDRO — Johnathan Schob has a love affair with baseball. After signing a letter-of-intent to play at the University of Rio Grande, it looks like a marriage made in A Field of Dreams.

“I had a couple of friends (at Rio Grande) so it’s something I thought about and it’s close to home. I’m looking forward to the next four years,” said Schob.

“He’ll be a good asset as a student-athlete,” said Litteral. “He’s a hard worker in the classroom and on the field. I know studies come first. The teachers here have nothing but good things to say about him.”

Schob is excited about the opportunity to get a chance to play as an everyday player at first base and still have the chance to fulfill his strong feelings toward pitching.

“I love to pitch. I love being out on that mound. The adrenalin rush I get takes me through the entire game,” said Schob. “I’d like (to pitch and play first base). I like to play better than sitting on the bench and waiting for my next (pitching) turn.

“And if the arm goes, I can go back on my hitting. It’s a nice backup plan.”

Litteral has no doubts that Schob can be productive regardless of how Warnimont chooses to used the left-hander.

“He’s always a competitor on the field. He’ll battle you all the way. He can pitch or play first base. He’s got a good bat. His speed has improved and he’s bigger. He’s only 17 so he’ll get bigger and stronger,” said Litteral.

Schob is a three-year starter for the Redmen. He was an All-Ohio Valley Conference selection last year and was named to the Southeast Ohio District 13 Coaches all-star team.

Long-time Ironton announcer and booster Rick McKnight was honored for his years of service by the Southeast District Board. (The... read more