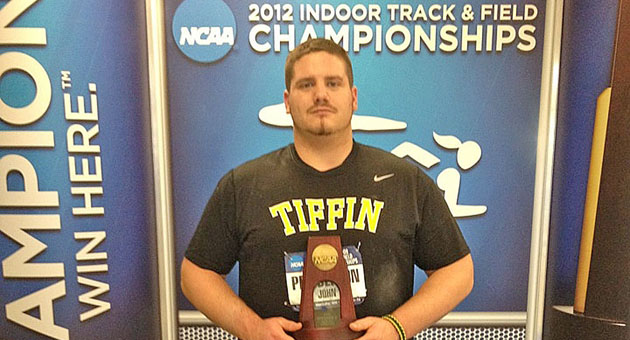 Pemberton — who was the Division II state shot put champion at Ironton in 2007 — capped off a stellar indoor season with a record throw and All-American honors on and off the field.

The red-shirt senior finished third in the shot put at the NCAA Division II nationals held in Mankato, Minn.

“It was one of those unreal feelings. You feel so much better about yourself. You can see your hard work pays off in the end,” said Pemberton.

“I came back because I knew I could do a lot better. I played football for three years and I knew I was behind. I knew if I got in the program I could improve.”

Pemberton threw the shot put 57-7.75 to break his own school record. His previous record was 57-3.5 he set earlier in the Findlay Classic meet.

He also holds the school’s outdoor record of 17.61 meters or 57-feet, 9 and 5-16 inches. If he continues to improve this season, Pemberton hopes to set his goals at an even loftier height.

“My goal this year is to get over 60 feet in the shot. I’m already close. I want to continue training after this year and hopefully have a shot at the (Summer) Olympic trials. I’d like to do my best at the trials. For me to reach that goal I’d have to go at over 62-feet this year,” said Pemberton.

Since Pemberton is now 24 years old, he figures to be physically ready by the time the next Olympics are held.

The third place finish is the highest individual finish for Tiffin and he is the first thrower to earn All-American honors at the NCAA Div. II level.

Besides his success on the field, Pemberton — a Criminal Psych major — also earned All-Academic Team honors. Athletes must have a 3.0 to 3.49 grade point average.

“That was great. It’ll look good on my resume,” said Pemberton.

NEW ORLEANS (AP) — Same story, new night for Kansas. The team that’s been teetering on the edge of the... read more