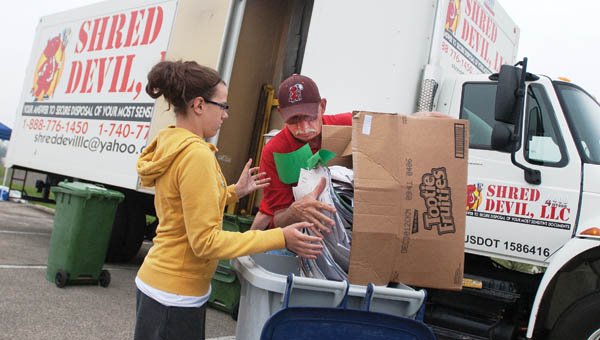 “I’m very happy with the turnout, this being the first time,” Palmer said. “And we got a lot of response from people who saw if, didn’t know what was going on and once they found out, asked when we would have it again.”

This was the second year the solid waste district offered document and personal paper shredding service. This year 73 vehicles brought 7,040 pounds of paper that was shredded on site.

“We had a wide spectrum of people coming through. We had people bringing military records. We had someone who had old checks and payroll records dating back to 1975,” Palmer said.

With documents and old computers collected, attention now turns to the pharmaceutical giveback that will be 10 a.m.-2 p.m. Saturday, April 28 at the Greater Lawrence County Chamber of Commerce.

That event is co-sponsored by the solid waste district and the Lawrence County Sheriff’s Office.

The annual county- wide cleanup day, involving several hundred people representing a couple dozen clubs and organizations, will be May 5. Palmer said groups that have not yet signed up to participate may still do so by calling his office at 532-1231.

The annual Ironton Easter egg hunt, sponsored by the Ironton Business Association and the Ironton Fire Department, is set for... read more