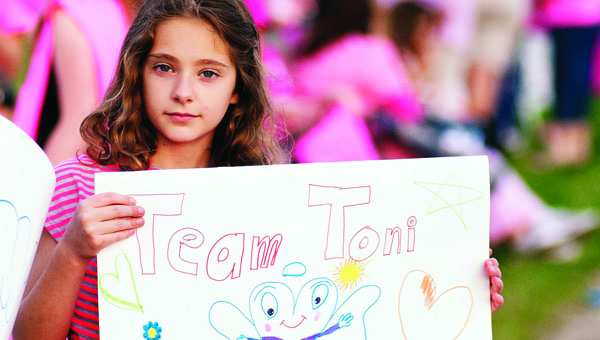 CHESAPEAKE — Toni Nicole Black made her way back home, a week after being told her cancer was terminal. The 23-year-old Chesapeake native came home to the support of an entire town. “Team Toni” was in full display to support a courageous young woman who is fighting the ultimate battle. Individuals lined up along the road to support Toni by holding up signs, banners and wearing “Team Toni” T-shirts.

“She is handling this like a champion,” Jalyn Bailey, supporter, said. “She could be devastated and be down, but she’s staying positive. She’s an inspiration. She knows that she is going to be OK.”

Interstate 64 was lined with supporters from Charleston to Huntington.

“She is an inspiration to all of us,” Chayce Chapman, childhood friend, said. “She has shown all of us not to give up the fight.”

Jill and Chad Greenhill, who own Tumble World in Chesapeake, organized the event to welcome Toni home.

“You wouldn’t believe the massive response from not just our community but the entire nation,” Greenhill said.

Since the Greenhills’ appeal to people to get on “Team Toni,” they have had massive success from people who either know Toni or have never met her but are touched by her story.

There were 500 “Team Toni” shirts that were printed up and they were all sold in 20 minutes.

“I am shocked by the level of support for her,” Chapman said. “I’m glad that our Tri-State area can come and support one person.”

In 2011, the former high school cheerleader and prom queen was diagnosed with lung cancer. Soon after the diagnosis, the cancer spread to Toni’s brain and she quickly began a yearlong treatment of chemotherapy and radiation.

Last month, Toni was readmitted to the hospital where doctors found a tumor on her lung. She underwent another round of radiation but the cancer was unresponsive. Toni’s doctors have stopped treatment. They have given her two months to live.

Bailey had words of encouragement to offer Toni.

“Keep fighting and stay strong,” Bailey said. “A lot of people are praying for you.”

ROME TOWNSHIP — The new barn planned at the Lawrence County Fairgrounds is getting a step closer to reality. On... read more